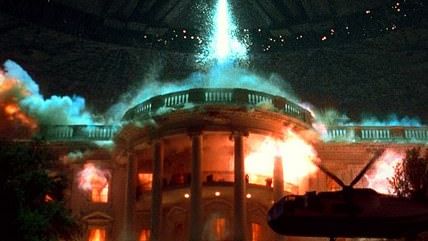 Government (and the creatures who infest its rotten carcass) was the most important problem facing the United States in 2014, Americans tell Gallup pollsters. That's up from being the second most serious problem in 2013, and the third-ranker in 2012.

Who says the American political system is stuck? This is progress!

The news that Americans are un-fond of government, Congress, the president, and politicians in general comes from an average of monthly survey results throughout the year. Given officialdom's litany of stupid government tricks, the elevation of America's own flavor of Leviathan to public enemy numero uno may seem like nothing more than good common sense to many observers. Perhaps an expression of collective survival instinct. Or, at least, mass revulsion.

True, government just barely edged out general economic concerns and worries over jobs and unemployment for top ranking. But still, it's impressive when the institution whose adherents bill it as the cure for life's ills wins top billing as a major disease itself.

Gallup's findings hardly come out of the blue. Pew finds public trust in the government, at 24 percent, is near historic lows.

A plurality of those surveyed (42 percent) tell Reason-Rupe pollsters that President Obama has expanded the power of the government too much. Majorities among younger Americans say that government is wasteful and government agencies abuse their power.

Americans have felt less free year by year since 2006, and there's a evidence to back up their perceptions of eroding liberty. That includes slippage in rankings of economic freedom and a plummet in the ratings of press freedom.

Distrust of government has become so pervasive that the Census Bureau thinks the only way to get cooperation from the seething masses is with threats. Probably because that always evokes warm and fuzzy feelings.

The good news for politicians, not that they deserve any, is that there's enormous room here for growth, and little downside. Frankly, it would be hard for them to disappoint a public that holds them in such low regard.