As Student Activism Grows, So Does Campus Resistance to Free Speech

"Procedure" is quite the effective tool for stifling student expression, but calls for "civility" and "tolerance" do the trick, too. 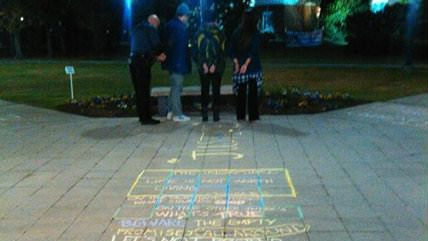 "Free speech all the time. Not just when admin says when, where, what about," read one side of the neon-yellow sign fielded by Ali Cohen, an education major at Coastal Carolina University, during a recent campus rally. On the sign's flip side: "#BlackLivesMatter. And I should not be facing charges for writing that… in chalk."

Cohen is one of a handful of Coastal students facing disciplinary action for sidewalk chalk messages protesting racial injustice and the non-indictment of Ferguson police officer Darren Wilson in Michael Brown's shooting. Three of the students—those caught in the act—were handcuffed and detained by CCU police. Cohen was identified by surveillance camera footage from the night before. "The video showed multiple people," says Cohen. "They identified me from a picture of me in the library."

The university said it will not be pursing criminal charges, but Cohen and her chalk co-conspirators have been charged with violations of the university's conduct code, including vandalism and "unauthorized usage/entry." A police incident report alleges $1,000 in damages from the chalk—the same sort regularly used by Greek organizations and student groups on the same campus sidewalks.

But "the individuals did not get prior approval from the Office of Student Life, as is required by university polices," explained the university in a statement. Approval requires being a member of a registered student organization and making the request at least a week in advance.

The situation at Coastal echoes other recent conflicts between university administrations and student activists. Across the country, student activism has been on an upswing, according to City University of New York (CUNY) historian Angus Johnston, who created a Google map charting 50 recent student protests, walkouts, and demonstrations.

"This has been an extraordinary autumn for student organizing in the United States," writes Johnston. "From protests against police brutality and sexual assault to anti-tuition demonstrations and a new wave of campus occupations, students have been standing up and speaking out to a degree not seen since the heyday of Occupy."

One of the most striking trends Johnston noted was that of high-school protests and demonstrations. In Minneapolis, 400 South High School students walked out of class and marched to the local police station on November 25 to protest the events in Ferguson. Hundreds of New York City high school students did the same thing on December 1.

But high-schoolers are often treated to the same lessons in speech restrictions as U.S. college students like those at Coastal. In Lewiston, Maine, high schoolers had a #BlackLivesMatter poster taken down by Lewiston School Administration. Student Muna Mohamed posted to Facebook: "Their rebuttal for why we are being forced to take this display down is all lives matter, they don't want to make people uncomfortable." The school said the students had not gone through the proper poster approval process.

Procedure is quite the effective tool for stifling student expression, but there are others. Campus administrators are also fond of mentioning things like "civility" (heaven forbid strong language be used when discussing things like state violence) and "tolerance." It's apparently intolerant these days to speak out against perceived political or social injustices in a way that might confuse, offend, or "threaten" the emotional well-being of anyone.

At the University of Iowa last week, school officials declared an art installation highlighting racial violence to be inexcusable hate speech because some confused its meaning to be pro-racism. Administrators apologized to the student body and demanded the artist, visiting professor and art fellow Serhat Tanyolacar, do so as well.

Tanyolacar originally apologized on Twitter, but issued another statement Wednesday in which he espoused his belief that "freedom of speech is an essential part of all civil societies" and "public art is one of the most vital acts of free speech available to the civilian." He said his work's aim was "to trigger awareness and open dialogue," and that's exactly what it has done.

Between the lines of Tamyolacar's statement is something important: the prevailing campus wisdom about shielding every individual from potential hurt, micro-slights, or offense may make everyone feel good, but it doesn't do a damn thing to foster actual, systemic change. The personal may be political, but it's not all there is to politics.

When we don't expose ideas to criticism or questioning out of politeness or a desire not to provoke, we wind up with lazy thinking and in turn lazy solutions. That's the environment that campus speech censors are fostering.