The Reality and Propaganda of War

An honest conversation about foreign policy requires us to confront the brutality and imagery of violence.

Matt Welch | From the January 2015 issue 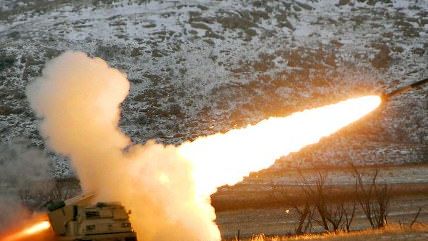 The threatening-looking man on the cover of this magazine is an Islamic State (ISIS) terrorist with a British accent who took the lead role in propaganda videos showing the beheading of American journalists James Foley and Steven Sotloff, acts of horrifying brutality that helped propel the United States into war.

Considerably more graphic versions of that image, including a visibly terrified Foley, were run the day after his murder under the headline "SAVAGES" by both of New York's major tabloids-the Post and the Daily News. The papers received a smattering of criticism in the press and across social media for sensationalism, for insensitivity to Foley's parents, and for amplifying the terrorists' publicity.

So why did we put this image on the cover of reason?

This special issue of the magazine is dedicated to the project of applying the clean philosophical and theoretical underpinnings of libertarianism to the messy world we live in. That real world includes several complicating factors that are best illustrated by the cover image.

The first is ISIS itself and what it represents. Since the 1648 Treaty of Westphalia, the inviolability of the nation-state has been the bedrock of international relations theory and action. No matter how awful the government of said state might be to its own residents, other countries maintained a default setting of not interfering with its internal affairs unless and until they spilled over the border in the form of state-on-state aggression. The bulk of international conflict, therefore, was government-to-government.

ISIS—like Al Qaeda, from which it sprang—has complicated that narrative by being a transnational aggressor organization carrying out campaigns of murder, including against Americans, from the murky corners of failed states. Neoconservatives on the right and liberal internationalists on the left have been treating national sovereignty as an archaic obstacle to overcome for most of the post-Cold War era, with a mixed track record at best. But even someone as committed to nonintervention as Ron Paul (see "Dr. Never," page 42) will admit that having the Taliban help plot the 9/11 attacks from the safe haven of a dysfunctional Afghanistan necessitated American military action. So any plausible foreign policy, let alone a libertarian one, needs to grapple with the reality of non-state actors.

ISIS is also the latest excrescence of a militant and expansionist wing of Islam that seeks to impose a retrograde Shariah law upon unwilling human beings, by murderous force if need be. And it is an organization that sprang from the chaos left behind after misguided American military interventions in Iraq and Libya. Too many foreign policy commentators-including not a few self-identified libertarians-will acknowledge only one of the previous two sentences. As Sen. Rand Paul (R-Ky.) says (see "The Conservative Realist?," page 48), "Will they hate us less if we are less present? Perhaps. But hatred for those outside the circle of 'accepted' Islam exists above and beyond our history of intervention overseas."

The younger Paul, amid much controversy, is attempting to apply the principles of intervention-skepticism to the also messy world of national politics. The senator is almost certainly seeking the presidential nomination of a political party that is considerably more hawkish than he, and he has been calibrating his message and positioning-including support for bombing ISIS-against that backdrop. Which brings us to the next key foreign policy concept our cover image represents: politics, and the underlying public opinion behind it.

ISIS' beheading videos were carefully composed to maximize Western attention and dread, with their native English narrator and stark all-black and all-orange costumes against a tan desert background. The impact was powerful enough to change the course of U.S. foreign policy.

A remarkable 94 percent of respondents in a September NBC/Wall Street Journal poll said they had heard about the beheadings, "higher than any other news event the NBC/WSJ poll has measured over the past five years," NBC News reported. Not coincidentally, that same poll found 47 percent of Americans feeling less safe than they did before September 11, 2001, a high-water mark since 9/11 and up from just 28 percent the year before. Surveys throughout the fall showed around three-fifths of Americans favoring sovereignty-busting military action in Syria, versus around only one-fifth just 12 months before. What felt like surging anti-war sentiment in September 2013 had yielded to a kind of passionless, fatalistic interventionism by September 2014, in large part because of these two videos.

Any successful libertarian realism needs to understand and engage with the impact of images, news, and propaganda on a human race with a long track record of rallying around the tribe, particularly in times of duress. You can argue, as Sheldon Richman does in our forum on foreign policy ("In Search of Libertarian Realism," page 26), that "libertarianism means noninterventionism," but that message can fall flat on the ears of a public in mid-panic. Engaging people emotionally-even only to acknowledge their emotion in the course of dosing it with reason-is a necessary step if libertarian foreign policy is going to escape the margins to which it is too often confined.

It's also important to recognize that the propaganda (intentional or not) works in the other direction, too. Many news outlets agonizing over how to portray images of the ISIS videos had no such qualms about showing the worst of U.S. behavior at the notorious Abu Ghraib prison in Iraq (where, in case you have blotted out the memory, U.S. soldiers gave thumbs-up poses next to dead Iraqis, stacked prisoners in naked clumps, and tortured their charges). We at reason have long argued not only that it's crucial for citizens to have access to such graphic representations of their government's war making, but that President Barack Obama deserves special scorn for campaigning on releasing all of the Abu Ghraib images, then abruptly changing his mind once handed the awful responsibility of power.

Citizens need to be trusted with the visual truth, whether it's pictures of people jumping out of the World Trade Center on 9/11, footage of children maimed by U.S. drone warfare, shots of flag-draped coffins of U.S. soldiers returning from the battlefield, or allegedly inflammatory cartoon caricatures of the Prophet Muhammad.

You can interpret the image on the cover as a scary harbinger of an open-ended transnational war in the Middle East peppered by sporadic moments of gruesome anti-American blowback. Conversely, you can see it as a transparent and desperate attempt to drive up the ransom cost of Western hostages (a key source of ISIS income) and inflate the Islamic State's jihadist P.R. by successfully poking the hornet's nest of Uncle Sam. When we let two lives, no matter how precious and unjustly snuffed out by barbarians who deserve much worse, dictate the course of U.S. foreign policy, that becomes the most glaring reminder yet that American statecraft is rudderless, headline driven, and long overdue for a philosophical and practical course-correction.

So, like The New York Times and USA Today, we are using a less provocative version of a startling image to illustrate the foreign threat du jour. But unlike most, we also see it as an indictment of the way foreign policy is conducted nowadays. Careening from crisis to crisis, butting in and out of civil wars we little understand, is no way to protect the national or international interest. Yes, libertarians need to get real. But so do the people who actually hold power.