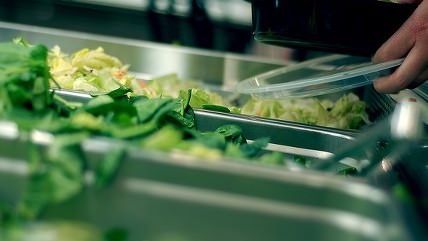 Today the Food and Drug Administration (FDA) finalized new rules requiring the inclusion of calorie counts on menus and vending machine labels. The rules, which are the result of some semi-stealthy provisions in 2010's Affordable Care Act, would apply to any restaurant or other establishment with more than 20 locations that sells "restaurant-type food." That wording may sound vague, but the process of final rulemaking is ruthless and it has in fact been defined within an inch of its life.

One reason for the "restaurant-type food" wording appears to be that the previous definiton was not good enough for some:

Sen. Tom Harkin (D-Iowa) and Rep. Rosa DeLauro (D-Conn.), who not only believe restaurants and grocery stores should be covered, but also movie houses, miniature golf courses, amusement parks and any other venue that serves prepared food.

The two lawmakers have written numerous letters to the FDA saying they are disappointed with how "narrow" the rule is.

"In fact, Congress intended the scope of the disclosure law to extend to movie theaters, bowling alleys, bookstore cafes, and other like establishments, which is the very reason Congress used the phrase 'and similar retail establishments' in the statute to extend the reach of the law beyond restaurants," the lawmakers wrote.

They seem to have gotten their way on this one, and vending machines are covered by a second, similar rule. But the new rules don't require restaurants to label general-use mustard bottles or daily specials. So it's still basically anarchy.

From The Wall Street Journal, the obligatory we don't think these new rules should apply to us quote from the grocery industry:

The Food Marketing Institute, which represents grocery stores, estimated the cost of complying with the proposed requirements at over $1 billion in the first year, with continuing costs reaching hundreds of millions of dollars.

"This is going to take away from anything that's freshly made in the store because the costs involved will be so high," said Robert Rosado, the trade group's director of government affairs. "You're going to lose fresh choices."

This plea for an exemption is somewhat self-serving (ha! see what I did there with the salad bar humor?) and exaggerated—after all, many grocery stores already post some kind of nutritional information on their fresh offerings and bakery goods without too much trouble—but it's also a good point.

At some point, disclosure laws cease to be about information and become strong disincentives to produce certain kinds of foods. And those may not always be be the kinds of foods that anti-obesity crusaders—remember wide American butts are ostensibly what this is all about—would like to eliminate. When faced with the choice between doing calories counts for servings of romaine, iceberg, and Boston Bibb and 17 kinds of dressing, a grocery store may opt instead to shrink its offerings and move away from marketing fresh, ready-to-eat foods to customers. On the margins, labeling may nudge some retailers to offer healthier choices, but it's also possible that grocery stores will get rid of the rabbit food altogether and just point their hungry customers to a display of Hot Pockets and a semi-sanitary microwave.

I don't know which way things will go in the end—there are studies pointing in both directions—but this is an awfully expensive way to find out.

And one final indignity: Every menu must also include this verbiage:

"2,000 calories a day is used for general nutrition advice, but calorie needs vary."