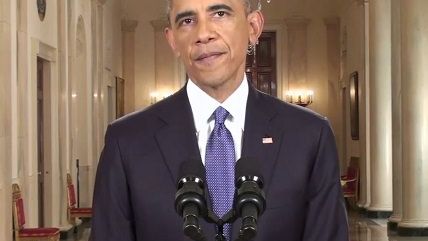 President Obama vowed executive action on immigration in a televised speech from the White House on Thursday night.

He began by criticizing House Republicans for failing to vote on a comprehensive immigration reform bill—necessitating the actions he is about to take.

"Had the House of Representatives allowed that kind of a bill a simple yes-or-no vote, it would have passed with support from both parties, and today it would be the law," he said. "But for a year and a half now, Republican leaders in the House have refused to allow that simple vote."

In lieu of legislation, the president announced additional resources for the border and an extended program for guest workers.

"We will take steps to deal responsibly with the millions of undocumented immigrants who live within our country," he said. "If you've been in America for more than five years; if you have children who are American citizens or legal residents; if you register, pass a criminal background check, and you're willing to pay your fair share of taxes—you'll be able to apply to stay in this country temporarily, without fear of deportation. You can come out of the shadows and get right with the law."

Obama stressed that the current policy constitutes de facto amnesty, since many immigrants evade deportation as it is.

"Tracking down and rounding up millions of people isn't realistic," he said. "Anyone who says otherwise isn't being straight with you."

He also expressed his preference for Congress to pass some sort of immigration law in the future.

Reason's Peter Suderman has reviewed the president's plan and believes it holds merit, although skeptics are right to point out the dubious Constitutional rationale.

In my own view, any night the government decides to stop ruining people's lives for not obeying absurd laws is a good night for libertarians.