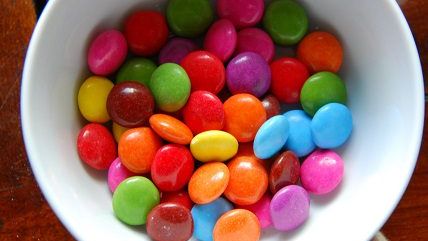 At least three New Mexico middle school students have been suspended for 10 days for inappropriately consuming Smarties. No, that's not code for some hip new drug; we are talking about the sweet-and-sour candies sold in a roll and given out to unlucky kids on Halloween. The Clovis Municipal School District classifies them as drugs and says the kids were snorting them.

The mom of one of the kids told KRQE News 13 that in fact the kids were fake-smoking them. That is, they were crushing up the Smarties, putting the powder back in the cellophane, rolling it up like a cigarette and puffing it out, so it would look like smoke. "They were horseplaying," said Kelly Cook, mom of one of the candy-crazed miscreants. (You can find more stories of Smarties suspensions here.)

Smoking or snorting, these kids were not taking drugs any more than eating M&Ms is popping pills. But the school insists that Smarties are extra scary and verboten:

News 13 asked the district Thursday what policy they're using in this case and if they have a specific rule against Smarties at school. They say they couldn't comment and referred us to their student handbook. News 13 looked at it thoroughly and nowhere could we find Smarties classified as a drug or even a mention of the candy.

So the school is the one that's blowing smoke. It has advised the kids' parents that they may want to bring legal counsel to a "fact finding" scheduled for Nov. 19. What's more, the school retains the right to actually expel the boys for their Smartie party. It's enough to drive you to the hard stuff.