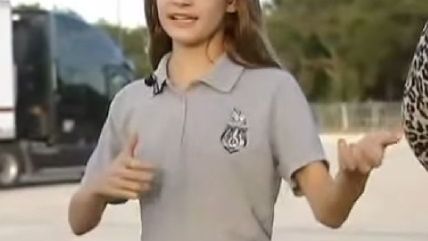 Students at Jewett Middle Academy in Winter Haven, Florida, dove under their desks and texted their parents in terror when armed police swarmed into the school, brandishing their weapons. The cops had neglected to warn the teachers and kids that there was no emergency: they were in the midst of an active shooter drill. According to Fox 13 News in Tampa Bay:

Lauren Marionneaux, a seventh-grade student at Jewett Middle Academy, said it was about 9 a.m. Thursday when the principal announced the school was going on lockdown.

Students huddled into classrooms waiting for further instructions. Instead, they started hearing voices in the hallway.

"A lot of people started getting scared because we thought it was a real drill," Lauren said. "We actually thought that someone was going to come in there and kill us."

Just doing their job… they said. After the mayhem, the school released a statement explaining that police drills like this are considered the best possible way to really test preparedness: "Parents, students and staff are typically not notified about lockdown drills. For example, we do not give advanced notice of fire drills in order to evaluate how safety procedures work…"

Of course, the authorities neglected to notice that no one sets the school on fire to create more realistic fire drills. Nor do they drag in giant wind machines to replicate the feel of an impending tornado.

The fear that teachers might suffer heart attacks, that kids might experience psychotic breakdowns, that someone with his own weapon might shoot real bullets in defense—none of that seemed to occur to our peacekeepers. Nor did the notion that distraught parents might race frantically to the school, endangering anyone in their path.

No, these cops were so focused on the most horrific, least likely crime that nothing else mattered.

But now it does. In response to the apparently bewildering blowback, the Winter Haven police say they have re-evaluated their M.O. and now plan to practice lockdowns without weapons.

No word on whether they'll play audio tapes of gunshot sounds, ambulances, and bloodcurdling screams.