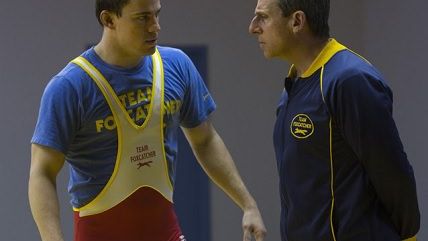 The three star performances at the heart of Foxcatcher — by Steve Carell, Channing Tatum and Mark Ruffalo — have already stirred much Oscar talk, and understandably so. They're remarkable in very different ways. It's too bad that the true-crime story in which these performances are set has been contorted to teach a sociopolitical lesson that is both trite and unpersuasive, as if the bizarre real-life facts of the case were too naturally engrossing — too lowbrow — and required a sheen of moral instruction in order to justify the filmmakers' more discerning interest.

The basis of the film is a sensational murder that made international headlines 18 years ago and is now, in a Wikipedia world, easily recalled. At the risk of inflaming the hyper-excitable "spoiler!" community, I suggest we simply recall it, and also recall how little still is known about what prompted it, which may explain why director Bennett Miller (Capote) and his writers, E. Max Frye and Dan Futterman, show so little interest in the impossible task of clarifying its motivations. Spoiler-folk should avert their eyes.

In 1988, multimillionaire sports enthusiast John E. du Pont, an heir of the DuPont chemical fortune, established a training facility for Olympic athletes on his 800-acre estate near Valley Forge, Pennsylvania, a place he called Foxcatcher Farm. Among the wrestlers, swimmers and pentathletes for whom he provided luxurious room and board on this property were two brothers named Mark and David Schultz, champion freestyle wrestlers who had each won gold medals at the 1984 Summer Olympics in Los Angeles. One day in January 1996, the mentally unbalanced du Pont shot and killed the 37-year-old David Schultz outside the estate house in which he lived with his wife and two children. Schultz had been a loyal friend to du Pont, and no motive for the murder — beyond probable paranoid schizophrenia — was ever determined. Du Pont himself attempted no explanation in the years before he died in prison in 2010, at age 72.

This story has a raw tabloid pull, but du Pont is too much of an enigma to really serve as a character. So director Miller uses him as a ruling-class mannequin in what he wants us to see as a tale of privilege and predation. This forces Carell to give a performance that, while fascinating, is all surface. Upholstered with a doughy body and cadaverous skin, he tilts his head back to stare down at the world along the length of a beak-like prosthetic nose, his eyes dead to human concerns and a feeble smile dying on his lips.

The real John du Pont — an accomplished ornithologist and philatelist, and an enterprising philanthropist — was a more complex character than the one presented here. For Miller, du Pont is a monstrous emblem of the idle rich, wallowing in unearned wealth while his collection of working-class athletes — true aristocrats — must content themselves with scraps from his baronial table. To thump this notion home, the director shows us old footage of a long-ago fox hunt on the estate, with horse-mounted bluebloods pursuing nimble creatures for sport before finally destroying them. And since du Pont is also a blowhard rightwing gun-nut patriot (he encourages people to call him "Eagle"), Miller reaches for political resonance by shifting most of the action back from the Clinton '90s into the Reagan-Bush '80s. He also cheats in attempting to provide du Pont with some psychological detail by setting up a mommy problem — inventing a scene in which du Pont's frosty mother (Vanessa Redgrave) expresses her disdain for his wrestling enterprise ("It's a low sport"). In fact, du Pont didn't launch Foxcatcher Farm until after his mother's death.

Carell's du Pont is a striking presence, in part because the character is so far removed from the actor's more familiar comedic work. But we already know that Carell can be a fine non-comic actor — he created a much more layered portrait of an entitled jerk in last year's The Way Way Back. Here he struggles to bring a cipher to life, and we marvel at his fierce commitment while also wishing that du Pont, as written here, were more worthy of the effort.

This emotional vacancy at the center of the movie is effortlessly filled by Tatum and Ruffalo, whose subtle depiction of brotherly love and conflict brings a warm glow to what is otherwise a cold and airless art film. Tatum expands his already remarkable range once again in playing Mark Schultz as a charmless, near-simian, slack-jawed lug. Wrestling is all that Mark has, but even winning Olympic gold hasn't brought him much. He makes a few bucks showing his medal off to school kids, but he's all alone and barely getting by on a diet of burgers and ramen. His older brother Dave, on the other hand, has transitioned into a coaching career; he has a wife and kids — a life. Mark harbors a vague resentment of Dave (they had a childhood of unspecified difficulty), but Dave is always there for Mark, no matter how prickly he becomes ("You're not in this alone, man").

Ruffalo's natural warmth as a performer is a crucial asset here. His Dave is a man for whom blood links — to his brother, to his children — are everything. And there's no finer scene in the movie than the long, quiet one in which Dave and Mark are practice-grappling in a gym, clutching and pushing and half-nuzzling in a vivid display of filial intimacy. The only sounds we hear are the squeak of their sneakers and occasional grunts, but the actors, wordlessly, show us everything. If only the director also had deeper thoughts to offer.