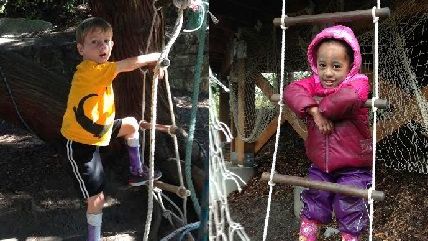 Last month, the Seattle Parks Department ordered the destruction of a play area designed for special needs kids, claiming its four-foot rope ladder, tire swing, and "nest" made of rope and bike tires were "extreme dangers" and "hazardous conditions." That's an odd verdict: In 10 years of existence, no children were ever significantly injured on the play area equipment, according to Liz Bullard, who helped design the space. As she writes in Crosscut.com:

These simple play features may seem ordinary, but…here children with cerebral palsy, autism and developmental delays are encouraged and assisted as needed to climb and swing alongside their typically developing peers. The joy is palpable.

We complied with the order, but it has left a bitter taste in our mouths. Our kids have been robbed of the simple pleasure of climbing and swinging under a beautiful tree.

The thing about kids with special needs is that they often have to spend a lot of time in less-than-fun institutions. Hospitals. Therapists' offices. Waiting rooms. The "Wild Zone," as the play area was called, was specifically "designed to provide relief from the highly controlled and often hyper-medicalized world our kids move in," writes Bullard.

One mom of a child with special needs commented on a post about the city's order, "This is a travesty!! How dare they steal the only play space in the Greater Seattle area, let alone the NW that is dedicated to creating a healthy play space for special kids where they aren't judged by their lesser abilities."

Wrote another mom: "The Play Garden is the best! My son attended preschool there for three years and I am so grateful for the Wild Zone. There was nothing dangerous about it. Nothing!"

Ah, but when you're a bureaucrat and you live in the world of what if thinking, danger is everywhere. Just imagine, "what if someone got hurt?" Look at the world that way and no play area wil seem safe enough.

This outlook seems to be sweeping Washington state. Recall that just a few weeks ago the Richland School District decided to phase out all swings because what if a child got hurt on them?

Too bad the bureaucrats never consider the reverse: What if kids never get a chance to climb a ladder, or hang from the monkey bars? What if kids with special needs know that after their doctor's appointment they will have to go straight home, because there's no place left for them to play?

At least they won't be exposed to the "extreme danger" of a tire swing.

Related: "Little Girl's Playset Is in Her Own Backyard, City Wants It Destroyed Anyway"