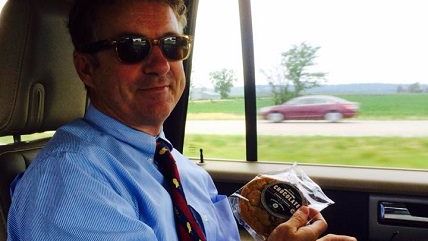 Libertarian Republican Sen. Rand Paul reiterated his strong opposition to President Obama's lawless war against ISIS on Monday. He penned an op-ed for The Daily Beast accusing Obama of subverting the Constitution, the War Powers Act, and the Federalist Papers by bombing ISIS absent Congressional authorization.

Paul saved his harshest criticisms for lawmakers of both parties who only show an interest in holding the White House accountable when it is occupied by a political enemy:

Where have those Democratic protectors of the constitutional authority of Congress gone? Was it always just a partisan attack on Republican presidents?

Now that the Republicans have full power in Congress, they are responsible for upholding the Constitution and pressing Obama for proper war authorization, wrote Paul:

Conservatives have rightly decried President Obama's unconstitutional executive action on Obamacare—and his promises to do the same with immigration. With both branches of Congress now under Republican control, we should act to halt those power grabs, too.

But conservatives can't simply be angry at the president's lawlessness when they disagree with his policies. They should end their conspicuous silence about the president's usurpation of Congress' sole authority to declare war—even if (especially if) they support going after ISIS, as I do.

It should be noted that Paul does ultimately support bombing ISIS, just not without a legal justification. Is that position good enough for war-weary libertarians and other skeptics? It depends on whom you ask [UPDATE: Link corrected]. Still, Paul unarguably deserves credit for using his post-election perch to insult interventionists on both sides of the aisle. As Paul writes, "If ever there was too much bipartisanship, it would be the bipartisan acceptance of unlimited presidential war-making power."

I wonder if Democrat Hillary Clinton—Paul's likely rival in a presidential showdown—would agree.