Spooky Politicians That Go Bump in the Night

The end of October brings children disguised as pretend ghosts and goblins, and politicians whipping up fears of supposedly real ones. 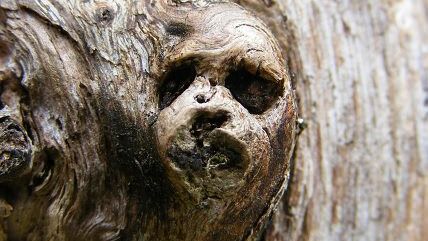 As predictably as falling leaves and longer nights, the end of October brings children disguised as pretend ghosts and goblins, and politicians whipping up fears of supposedly real ones. Democrats air spooky commercials alleging a war on women, on the poor, on teachers, on unions. Republicans speak of Islamic extremists poised to achieve world domination, or of terrorists wielding an Ebola weapon in the United States.

Both sides share the same message: the world is uniquely dangerous, and we're here to keep you safe.

To think otherwise—that the world is less dangerous—seems foolish. To state it publicly is presumed to be a political liability. After all, the world looks uniquely dangerous—especially if you focus on the dangerous parts. A new Cold War seems in the offing when Russia annexes the Crimea and sends its proxies into eastern Ukraine. President Obama's offhand remark that the Islamic State in Iraq and Syria (ISIS) was al Qaeda's JV team has been played back incessantly as ISIS has seized territory in Iraq and Syria. Ebola could be the modern equivalent of the Spanish flu of 1918 that claimed over 50 million lives worldwide. Or, for the U.S. at least, it could be more like the swine flu of 1976, which killed 1 person. More people died from the vaccine to prevent it. We simply don't know. But there are times, especially in the closing days of an election campaign, when it seems positively absurd to argue that the world is not very dangerous.

We can always use a little perspective, however, and campaigns shouldn't be fact-free zones. Of course there are dangers in the world. There always have been. And there always will be. But one's chances of dying a violent, premature death are at their lowest point in recorded history. The website HumanProgress.org (full disclosure, a Cato project) documents the many ways in which our lives are improving. And Americans, in particular, enjoy a degree of security and well being that our ancestors would envy and that our contemporaries do envy.

When we think of the litany of threats that Americans worry about, some are rather familiar. We still worry about war with major states, or about being drawn into wars with minor ones. We worry about the proliferation of mass casualty weapons—especially nuclear weapons.

And then there are new worries, from cyberterrorism to threats to our environment, the air we breathe and the water we drink.

Why are we so fearful? It could be that the confluence of old and new threats contributes to the widespread perception that the world is more dangerous than it ever has been. True, many of these dangers have always been out there—the Roman equivalent of al Qaeda terrorists were the Assassins. Even nuclear weapons have been around for decades. But the combinations (e.g. al Qaeda with nukes, cyberterrorism) seem particularly new, and, thus, particularly frightening.

Plus our perceptions are inevitably distorted by probability neglect: we focus a lot on the nature of the danger, but misperceive the likelihood that it will occur.

At a minimum, we should scrutinize the claims on a case by case basis.

Take, for example, the state of the global economy. Some fear that a war, or the mere threat of war, could disrupt global trade and commerce, including the world's oil supplies. This concern, at least today, is the main justification for the U.S. military's forward presence around the world, a posture oriented around stopping possible threats before they materialize.

But the patterns of global trade are far more resilient than the pessimists envision. War between major trading partners in our increasingly capitalist world is highly unlikely, and, even if it were to occur, trade flows between non-belligerents would not be disrupted, or not for very long. While war itself has many horrific effects, the costs that Americans pay to stop all wars are unlikely to be outweighed by the benefits. Exaggerated fears of distant conflicts even prompt the United States to fight wars that pose no direct threat to U.S. security, and to spend too much on the military, which, in turn, weakens the overall U.S. economy by diverting resources from the more productive private sector to the government.

Too many harbingers of peril start from a presumption of certainty: "We live in a uniquely dangerous world, and things are getting worse. Therefore, we must do, x, y, and z." More than the supposed dangers lurking behind every corner, we should fear the politician's appeal for policies that we must enact.

There is a political harm, after all, in taking politicians at their word. Individual liberty is often threatened during periods of heightened fear and anxiety. "Necessity is the plea for every infringement of human freedom," declared William Pitt the Younger in a speech to the House of Commons in 1783. "It is the argument of tyrants; it is the creed of slaves."

One of his contemporaries across the Atlantic agreed. It was "a universal truth," James Madison postulated in a letter to his friend Thomas Jefferson, "that the loss of liberty at home is to be charged to provisions against danger real or pretended from abroad."

A hundred years later, the noted social critic and satirist H.L. Mencken declared "the whole aim of practical politics is to keep the populace alarmed (and hence clamorous to be led to safety) by menacing it with an endless series of hobgoblins, most of them imaginary."

Such warnings remain sadly relevant today. And that is why we should work so hard to understand today's threats as they are, not as the spooky goblins they are made out to be.