Evoking "The Handmaid's Tale" as a supposed GOP policy goal isn't guaranteeing success at the polls. 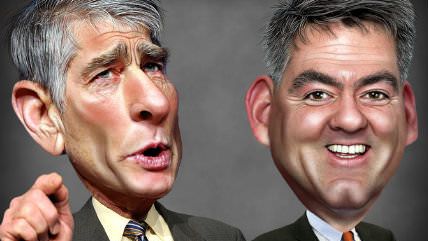 With less than one week left until the 2014 elections, national Democrat and Republican organizations are doubling down on the fight for U.S. Senate seats in several key states. For Democrats, this tends to mean ramping up rhetoric that paints GOP opponents as bad for women's health, livelihoods, and reproductive freedom. But are female voters buying it? And, if so, will that actually translate to wins for liberal candidates?

The polling data doesn't lend itself to much confidence in Democrats' lady-courting strategy. The Democratic Senatorial Campaign Committee (DSCC) has now spent tens of millions trying to motivate female voters in battleground states such as Arkansas, Colorado, and Iowa. But even (or perhaps especially) in races where "women's issues" have been a central focus, Democratic candidates are seeing only modest leads among female voters. Meanwhile, many of these candidates trail terribly among the male electorate.

In general, women are more likely to vote Democrat and men more likely to vote Republican, a trend that's been brewing since at least the early 1980s. Women are also less likely than men to vote in midterm elections. So it makes some sense that Democrats have been focusing get-out-the-vote efforts on female voters.

Add to this the fact that a) President Obama's once strong approval among women may be waning*, b) nobody wants to campaign on close associations to the president these days anyway, and c) this whole election has been "about nothing," and you can start to see why working the Republican "war on women" angle seemed like a smart strategy. As Reason Senior Editor Peter Suderman noted here recently, no major policy issues have defined the midterm 2014 elections and no particular legislation is imminently at stake. Much of what GOP candidates have been campaigning on has been platitudinal or opportunistic (Ebola czar, anyone?). Much of what Democratic candidates have been campaigning on has been fear-mongering about the GOP.

"It's not an election about which side to vote for. It's an election about which side to vote against," writes Suderman. NBC's Perry Bacon Jr. points out that "despite hundreds of millions of dollars spent by both Democrats and Republicans … many of the biggest issues are being ignored or playing very small roles in the 2014 campaign. … Many Democratic candidates, despite being heavily reliant on the black vote, have offered almost no policy prescriptions to the challenges illustrated by Ferguson, campaigning as if the incident and resulting controversy never happened."

However, the party hasn't avoided identity politics altogether. In several of the most contested races, there's been an inordinate amount of focus paid to what Democrats think women want.

In the Colorado Senate race, Democratic Sen. Mark Udall has gone all-in on bashing his opponent, Republican Rep. Cory Gardner, for Gardner's positions on things like contraception, abortion, and "personhood" amendments. Udall's laser focus on these issues—almost half of his campaign ads have concerned them—has earned him the nickname "Mark Uterus" from The Denver Post. Here's a sample Udall ad:

All of this might be understandable if Gardner was also focused extensively on these issues, or was campaigning as a particularly socially conservative candidate. But Gardner's campaign has focused more on things like the economy and energy policy. He says his wife uses contraception and he has no desire to "outlaw" it—in fact, Gardner supports making birth control pills available over-the-counter, which Udall does not.

Gardner has also retracted his previous support for a Colorado personhood amendment that would have defined life as beginning at conception. And perhaps most shrewdly, he hasn't let Udall set the agenda, only responding to anti-woman criticisms strategically. It seems Gardner has learned that the first rule of the Internet also applies to the campaign trail: Don't feed the trolls.

Udall does show a slight lead with women in most polls, but it's hardly one Democrats could have been hoping for considering their efforts. The most recent Quinnipiac University poll shows Udall supported by 45 percent of likely female voters, compared to 41 percent for Gardner. Meanwhile, Gardner leads Udall among male voters 51-38 percent.

A recent NBC News/Marist Poll places Gardner 1 percentage point above Udall overall, but 15 points ahead with men, up from a five point male lead in September. Over that same time period, Udall's female advantage dropped from 14 points to 11 points, according to NBC/Marist. And some polls, such as last week's USA Today/Suffolk University poll, even place Gardner ahead among women.

Similar dynamics can be seen in other close Senate races this election. In Kentucky, Senate Minority Leader Mitch McConnell is polling similarly among women as his female Democratic challenger Alison Lundergan Grimes, who has made a concerted effort to capture the women's vote.

In Arkansas, Democratic incumbent Mark Pryor polled slightly higher among women in a recent survey from CBS News/New York Times Upshot/YouGov, attracting 38 percent of the female vote to GOP challenger Tom Cotton's 33 percent. Yet Cotton is winning over men by 18 percentage points more than Pryor. And one poll showed Pryor losing among men and women, with women favoring Cotton 46-43 percent.

Even in races where women voters are leaning more strongly Democrat, they're not doing so at high enough rates to counter strong male support for the Republican candidates. In Alaska, where incumbent Sen. Mark Begich has been slamming GOP opponent (and current Anchorage mayor) Dan Sullivan for his views on equal pay and abortion, the Democrat does enjoy a hefty 49-32 percent lead among women. But this is offset by Sullivan's 51-34 percent lead among men, and Sullivan is polling slightly higher than Begich overall.

In Iowa, U.S. Rep. Bruce Braley has hammered Republican state Sen. Joni Ernst and for her support of federal and state "personhood" amendments, which may be paying off with female voters—a Quinnipiac University poll released October 29 showed women backing Braley 50-42 percent. But this is down from the previous week's poll, when women split 53-40 percent in Braley's favor. And Ernst now enjoys a 17 percentage point lead among male voters. Overall, the Quinnipiac poll showed Ernst leading 49 to 45 percent.

And in North Carolina, where Sen. Kay Hagan has campaigned hard for women's votes, she does lead by 10 percentage points among all likely female voters and 29 percent among unmarried women. GOP opponent Thom Tillis, however, has a 10 point lead among men likely to cast a ballot. (This is also the state where Cosmopolitan magazine will be sponsoring a party bus, equipped with shirtless male models, to drive female college students to the polls.)

Are Democrats' new tactics in these states driving the female gender gap in their favor? That's hard to say, considering women voters routinely skew Democrat. It's certainly plausible that emphasis on issues like contraception and equal pay may be helping them gain ground in some races where Republicans aren't particularly adept on these issues. Nationally, however, it's hardly been a home-run strategy for the DSCC.

At least part of the reason "War on Women" rhetoric worked so well for Democrats in 2012 was the existence of GOP senatorial candidates such as Todd Akin and Richard Mourdock and their tone-deaf comments on things like rape. There has been no Akin-proportionate GOP gaffe this year to grab national headlines. Rather we have folks like Gardner, whose messaging around women's issues has been spot on.

When pressed about polls showing lackluster female support, Democratic strategists have insisted that this matters little and, come election day, it'll all pay off.

It's interesting to note, however, that "women's" electoral issues don't really divide the sexes in the way many might expect. In the 2008 book Unconventional Wisdom: Facts and Myths about the American Voter, the authors point out that gender-specific issues (such as abortion) tend to find similar support and opposition levels among both women and men.

These issues also just aren't that salient to voters right now. In a recent NBCNews/Marist poll of likely Colorado voters, respondents biggest concerns were job creation and economic growth (22 percent), breaking partisan gridlock (17 percent), health care (11 percent), government spending (10 percent), and ISIS (8 percent). "Looking out for the interests of women" came in a three-way tie for lowest issue of concern among the choices, along with immigration and Social Security/Medicare (each received 7 percent).

As many political strategists, writers, and pundits have noted over the past few weeks, issues like birth control and abortion simply rank low among the list of current concerns for female voters. This likely isn't an expression of how important women consider their availability—the vast majority of American women will use birth control in their lifetimes and one in three will have an abortion—but the fact that they genuinely aren't pressing political matters right now at Congressional level.

The federal Life at Conception Act—which several Democrats have used as a cudgel against GOP opponents who did (Gardner) or do (Ernst) support it—has about as much chance of being enacted as your dog does of becoming president; it would take passing both chambers of Congress with two-thirds support and ratification by 75 percent of state legislatures. And as George Will noted in a recent Washington Post column, "access to contraception has been a constitutional right right for 49 years" while "the judiciary has controlled abortion policy for 41 years."

The idea that this country will ban birth control entirely or amend the Constitution to define fertilized eggs as people is simply not plausible. But as H.L. Mencken says: "The whole aim of practical politics is to keep the populace alarmed (and hence clamorous to be led to safety) by menacing it with an endless series of hobgoblins, all of them imaginary." In 2004, our hobgoblins were happily married gay couples. In 2010, an influx of illegal immigrants. This year, it's The Handmaid's Tale coming true.

Whether the strategy proves effective remains to be seen, albeit for not much longer. But the 2014 election has already proved Democrats just as willing as GOP counterparts past to stoke absolutely baseless fears for electoral gain.

* Gallup contests the (oft-cited elsewhere) idea that women's approval of President Obama has waned over the past few years.