Little Girl's Playset Is in Her Own Backyard, City Wants It Destroyed Anyway 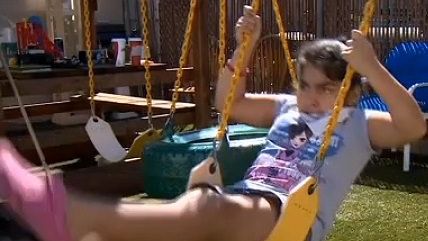 Fellow libertarians, we may be observing peak bureaucratic cruelty in Santa Fe Springs, California. City officials told Jessica Torres and Felix Miranda to destroy their backyard playset—a gift to their handicapped 10-year-old daughter from the Make-A-Wish-Foundation—because it is a "public nuisance," according to CBSLA.com.

Young Tiffany suffers from seizures and can't play at the public park, so the Make-A-Wish-Foundation gifted her a personal playground. It sits in her backyard, on Miranda family property. Nevertheless, the city thinks it has the right to force the family to disassemble the playset. When Torres approached a city official, she was treated as courteously as would be expected by anyone else who has ever gone up against the tyranny of local government. According to CBSLA.com:

"When I asked the city, 'So where do you expect my daughter to play?' they said 'Well, the city's not responsible for your daughter's disability,'" Torres said. "They said 'Your Tiffany is not our problem.'"

The city's rationale for ruining a little girl's happiness is that the playground area is cluttered and dangerous. Local reporters called shenanigans on that verdict:

But Torres, who's an oncology charge nurse at Beverly Hospital in Montebello, showed CBS2/KCAL9 reporter Adrianna Weingold the backyard, front yard and the inside of the family's home and things looked relatively neat and tidy.

Torres showed Weingold some of the tickets the city's issued, calling on the family to remove all items from the backyard and front yard, including all playground equipment.

After Weingold approached city officials, they changed their story. Now it's perfectly fine to keep the personal playground up and running, they said—despite what is explicitly printed on the numerous tickets the Mirandas received for hosting unauthorized fun in the privacy of their own backyard.