'Are Teachers Ready for the Common Core?' Answer: A Resounding 'No' 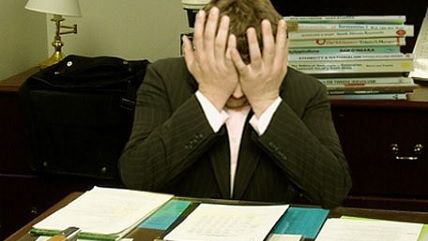 The Boston Globe ran a great story yesterday headlining the question: "Are Teachers Really Ready for the Common Core?" After reading the story, the only possible verdict is absolutely not.

Common Core sets new standards for what students should learn and how they should learn it. But putting that into practice is more difficult than waving a magic standards wand. A complete, forced transformation of the American education system mandated by national bureaucrats requires new textbooks, testing materials, and training for teachers.

On that last front, it looks like teachers are somewhat averse to throwing out everything they have been doing and learning a new method just because Bill Gates thinks its great. From The Boston Globe:

Despite research that says one-time workshops and short-term training sessions have poor track records for changing teacher practices, they continue to be the most common form of professional development?—?even now that the Common Core is supposed to be upending the old way of doing things, says [teacher Allison Gulamhussein]. While 90 percent of teachers participated in short-term training, just 22 percent observed classrooms in other schools, according to a 2009 study published by Learning Forward (formerly the National Staff Development Council), an international organization focused on increasing effective teacher training. Furthermore, the same study found that fewer than half of teachers who participated in training considered it useful. Still, districts shell out money on professional development, as much as 5 percent of the total budget in some places before the recession. Districts also get financial help for this purpose from the federal government and spent more than $1 billion in federal funds on such training in the 2012-2013 school year. Boston's education department spent about $5.5 million on professional development in fiscal 2014, up nearly $500,000 from the previous year, according to documents the district publishes online. Officials say additional money is allocated for teacher training from other areas of the budget.

Experts argue that this much is clear: If the Common Core is going to live up to expectations, teacher training needs to change, and fast.

The story evaluates teacher training programs in Massachusetts, a state that is by all accounts ahead of the curve on Core implementation. Still, many are skeptical that training helps at all—and even more are skeptical that the trainers themselves understand Common Core requirements.

Even if Common Core eventually boosts student performance—and the evidence of that is underwhelming—nobody in school today is going to benefit from it. Students will flounder under the instructions of teachers whose methods are misaligned to the curriculum, textbooks, and tests.