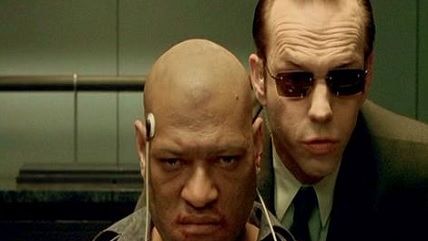 If you ever get hauled off by CIA for an interrogation, just count your lucky stars Agent Analiza isn't on the force anymore. That guy was cold, heartless (literally!), and … a bit glitchy.

Analiza was an artificially intelligent (A.I.) chatbot used in the 1980s. Vice's Jordan Pearson this week spotlights this ambitious, forward-thinking piece of technology, thanks to a document the agency just released through a freedom of information request.

Titled "Interrogations With an Alleged CIA Agent" and dated 1983, the document details the bot's features:

Through sophisticated algorithms the program breaks down Joe's responses and looks for key words and phrases in order to formulate a reply. In addition, it draws from its own internal question bank to direct the questioning to new topics. Because it retains its memory of the topics covered, it will have more surprises in store for Joe as the sessions continue; with time it becomes increasingly more knowledgeable about Joe.

Other aspects of the program are probing Joe's vulnerabilities. A.I. records "focus variables," Joe's tendency to concentrate on various subjects, and "profile variables" to serve as indicators of Joe's hostility, inquisitiveness, talkativeness, and understandability, and to pose questions about these.

Also, it could "detect hostility and to exert certain defensive measures against it," but by the agency's own admission, Analiza was "primitive," "crude," and "has a long way to go before it even approaches the merest capabilities of humankind."

Still, it is pretty impressive – and eerie – for a piece of technology that predated Tetris.

Here's part of the interrogation between Analiza, acting as an agent for a "foreign power," and a real agent under the pseudonym "Joe Hardesty":

A.I.: You had better straighten out your attitude, Joe, or it will be a long time before you ever leave this country.

Hardesty: What do you mean by that crack?

Hardesty: You made a threat and I want an explanation.

A.I.: I think the message is clear.

A.I.: Do you work for the American Central Intelligence Agency?

A.I.: Why do you persist in lying to me?

Hardesty: I am not lying. You have no right to treat me like this.

Throughout the interview, the bot presses Hardesty to "go on" and give more details so it can build its knowledge for the next round of questions.

So how far have we come in the last 30 years? As Pearson points out, the federal government is currently testing bots to interview people for national security purposes. But, there's still some way to go, since even this year's "most intelligent" chatbot isn't as smart as its developers hyped it to be.