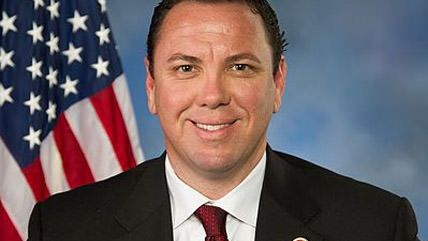 Rep. Vance McAllister (R-La.) was just your everyday empty suit politician until a surveillance video from his own office was leaked earlier this year. Filmed during a Christmas party (just weeks after he took office) it revealed McAllister's super power: the ability to passionately smooch one of his aides, ruin her marriage, and then convince her to "voluntarily" part ways with her job.

The world also caught a brief glimpse of McAllister's super arrogance. Heath Peackock, a friend and big donor to McAllister's campaign, who happened to be the husband of the smooched aide, Melissa, claimed that the congressman's religious rhetoric was just a political schtick. And, despite demands to resign from fellow Republicans like Gov. Bobby Jindal and Louisiana Republican Chair Roger Villere, McAllister said he wouldn't budge, insisting vague things like, "I've always tried to be an honest man."

Even the Duck Dynasty Robertson clan, which helped McAllister get elected, was quick to distance itself from the public servant after his scandal.

Now, McAllister's flaunting that super arrogance. He just released an advertisement titled "Blessed," parading around Kelly, his wife of 15 years.

"Life is filled with ups and downs," the congressman says sagely.

"But a man's character," adds the mother of his five children, "is based on how many times he gets back up and stands again."

Read about how McAllister apparently texted about his kissing scandal with complete stranger.