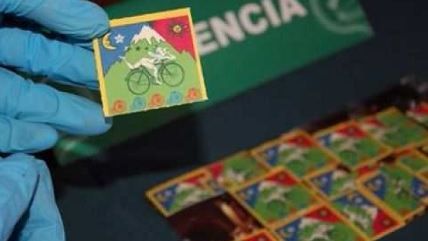 South Coast Today has a story headlined "Police Worried About New Drug, Lawmakers Try to Ban It." The new drug? 25I-NBOMe, a hallucinogenic chemical discovered in 2003 and made a Schedule I narcotic by the Drug Enforcement Administration (DEA) last year. Nevertheless, South Coast Today reports that local cops and lawmakers in Massachusetts are worried:

"Anytime a new drug becomes available and is popular with teens because of its euphoric or mind-altering effect, it is very concerning to law enforcement and should be for parents," said Fairhaven Sgt. Kevin Kobza, the department's public information officer…

"I'm committed to seeing that it is addressed," said Rep. Keiko M. Orrall, R-Lakeville, adding the new legislative session begins in January. "The drug epidemic is everywhere. It has affected a lot of families and we're committed to addressing it."

But so far, police on SouthCoast say they have not seen any traces of the drug.

"A lot of times, some (drugs) don't make it this way," said New Bedford Detective Capt. Steven Vicente. Crystal meth is an example of a drug that was not popular here.

"We haven't seen it in this area."

"We have not seen any cases of it, and hopefully we won't," said Mattapoisett Police Chief Mary Lyons, adding it seems to be popular with high school-aged students. "I haven't heard that it is around here."

The DEA "emergency scheduled" 25I as an illegal narcotic, placing it on Schedule I for two years.