Ron Paul at LPAC: Liberty Depends on Both Non-Aggression and Tolerance

"Just because you allow somebody to have a lifestyle you disapprove of doesn't mean you have to endorse it. A lot of people don't quite understand that." 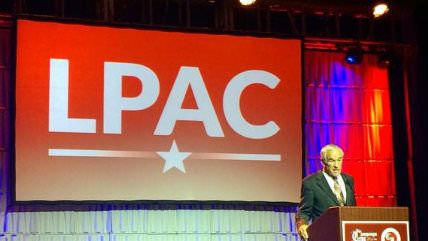 Though I missed Sen. Rand Paul at this weekend's Liberty Political Action Conference (LPAC) in Alexandria, Virginia, I was able able to catch the evening portion yesterday, featuring his papa. Unlike a lot of slightly younger libertarians I know, I didn't come into the fold via Ron Paul, and this was the first time I've heard the former Congressman and Republican presidential candidate speak live. I was charmed—the man certainly has charisma—and though he lost me a few places, I thought Paul's statements about American foreign policy and the general precepts of liberty were really great. The crowd seemed the most gung-ho when Paul spoke about foreign policy, economic matters like taxes and the gold standard, and dysfunctionality in Washington.

Toward the end of the speech, Paul stressed that there are two basic principles of liberty: non-agression and tolerance. "We have to become quite tolerant of the way people use their liberty," he said, lamenting the fact that folks on all sides seem to have a problem with this concept.

There are many who say 'I believe in freedom, I believe in liberty—as long as you don't do stupid things or do things I consider immoral.' … But it's not up to the government or you as a neighbor to say… well, we don't like the way you use your liberty. Your lifestyle is not what we like; you go to a church that's not a good church and it has crazy ideas and we wanna ban that church; and you read books that aren't good books and we wanna ban those books; and you have a sexual lifestyle that we don't endorse; and you put stuff into your body and into your lungs that we think are bad for you; and therefore we're going to have the government make you a better person.

Tolerance, explained Paul, doesn't mean you necessarily endorse others' choices, only their right to make those choices.

Just because you allow somebody to have a lifestyle you disapprove of doesn't mean you have to endorse it. A lot of people don't quite understand that. They think legalizing freedom of choice is an endorsement of what people do. And there's no reason in the world that this can't bring people together. If you have people on the left and people on the right and they want liberty for something over here, and somebody wants liberty for this over here… why shouldn't everybody come together for liberty to use it as they see fit?

Economic liberty and personal liberty can't be separate, Paul emphasized. "It's so crucial that we realize that it's one unit… that liberty is liberty and it's your life and you have a right to use it as you see fit."

Some more quotes from Paul's speech…

I was disappointed in the vote in Scotland. Who here would have been glad too see a yes vote? (Lots of cheering) That would've been very exciting, but it's still exciting that a lot of people around the world have been thinking about this. … The smaller the units of government the better, and self-determination should be respected. Just about a hundred years ago we had a president who thought that we should make the world safe for democracy. I think we should make the world safe for liberty, not democracy.

Woodrow Wilson drags us into (World War One) and one of his big pitches was self-determination… Then he gets in and participates in this redrawing of the lines in the Middle East that we're still fighting over. And now of course there's a challenge to the lines… they were artificial then, they're artificial now, and they're going to be redrawn because we live in a new age, in a positive way, a new age because things are changing. … People are saying enough is enough, we want to be on our own.

So what's wrong with an idea whose time has come, the idea that we have a foreign policy based on the Golden Rule and don't do anything to anybody else that we wouldn't want them to do to us?Wouldn't that solve a lot of problems?"

… We helped start Hamas and then we said, 'okay, I think you should have democratic elections', and they did, but then we didn't like who they elected so we decided to turn on them. So then they had an election in Lebanon, Hezbollah gets elected, and oh, we don't like them, and on and on … How long did we support the dictator of Egypt? Tens of millions of dollars, then we decide we don't like Mumbarak so we kick him out, and we say 'okay have an election', so they elect somebody that belonged to the Muslim Brotherhood. Oh, we don't like them, so we've got to get rid of him and put in the military dictator again. When are we going to wake up as an American people and say it's not working, it's stupid, it doesn't help us, it's bankrupting us, and it puts us in more danger and we ought to quit?"

All this argument back and forth—I think it's all fluff, it's all fake. But there's a good reason for them to agree. They've got to get home, and … they've got to get reelected to do good. And they believe this, they … would probably on a personal basis say they would agree with a lot of what we believe in, but … they don't want to look extreme. And 'if we're not (in Congress) how can we do all this goodness for the country?' So they sell their souls and they sell themselves, in many ways—monetarily and I think morally, too, because they just give up their beliefs and deceive the people. A lot of people campaign very well and then when they get there they compromise very well, too.

On the non-aggression principle:

Do you think people around the world want to emulate (America) now? Because any time we don't like anything they do, we…send sanctions to punish the people, and we send bombs to kill a bunch of people, and then we kick out the leaders we don't like. And you don't persuade people that way, you do it by setting a standard…It isn't like you have to have a PhD in some fancy science to understand well, uh, don't hurt people.