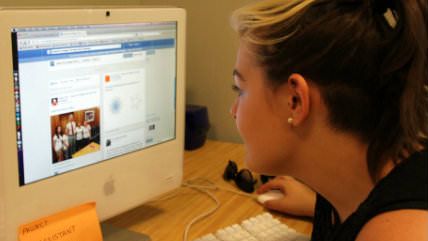 With speech codes chilling free expression on college campuses and Twitter warriors presiding haughtily over online speech, it seems a bit gloomy out there for fans of the First Amendment. But a new survey from the Knight Foundation finds teen support for free speech is high. For the first time in a decade, U.S. high-school students are more into the First Amendment than adults, and their appreciation for it goes up with their level of online media consumption.

"This marks a shift: 10 years ago students (35 percent) were more likely than adults (30 percent) to say that the First Amendment goes too far," the Knight Foundation notes. And in 2006, 45 percent of teens and only 23 percent of adults thought so.

Millennial teens are now more likely than their teachers to support free expression also, particularly when it comes to school matters. Of the 588 teachers simultaneously surveyed by the Knight Foundation, the majority disagreed that First Amendment rights should apply to school activities. Fifty-seven percent of the teachers said student newspapers shouldn't report on controversial subject. And a whopping 67 percent said students shouldn't be allowed to express anti-teacher or school administrator sentiment on Facebook without penalty.

Despite teachers' anti-free speech feelings, students who had a class explaining the First Amendment were more likely to support it than those who had not. Free speech support also grew with a student's digital media consumption. "The most supportive students of all are heavy digital media users who also have had a class explaining the First Amendment," said Eric Newton, senior adviser to the Knight Foundation's president.

Digital media consumption is, unsurprisingly, huge among high-school students, with the number who read news online daily jumping from 31 percent in 2006 to 71 percent now. The proportion of students who consume digital content daily through a mobile device jumped from 8 percent to 62 percent. Other survey highlights:

Ken Paulson, president of the Newseum Institute's First Amendment Center and dean of Middle Tennessee State University's communication school, said the study "reminds us of the need to pro-actively teach what young people engaged in social media know intuitively: First Amendment freedoms are at the heart of the American experience."