New NFL Policy Tougher on Wife Beaters Than Pot Smokers, But It's Close

The league had a chance to start changing this perception last week, but unfortunately it dropped the ball. 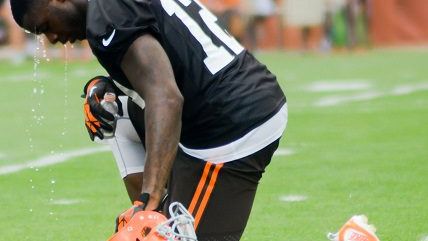 The NFL Players Association approved a new, liberalized drug policy last week that increases the threshold for what's considered a positive test for marijuana. This comes almost 15 days after the league stiffened penalties for players involved in domestic abuse, and both changes are no doubt moves to repair the rapidly decaying image of the league in the wake of the Ray Rice elevator video.

Over the last few weeks, the league was harshly criticized by Reason and other publications for suspending wide receiver Josh Gordon for an entire season as a result of a positive marijuana test, while sidelining Rice for just two games after he was accused of beating his then-girlfriend and now-wife, Janay Rice, unconscious in a casino elevator. The more lenient punishment was scrutinized even before TMZ released video footage of the incident last week; Rice, who is 206 pounds of solid muscle, repeatedly punched Janay and then nonchalantly dragged her body out of the elevator.

The leak of the video intensified criticisms from the broader media to the point where Rice became the top story for talk shows and news sources around the country. As a result of the outrage, Rice was cut from the Baltimore Ravens and suspended indefinitely. Gordon, on the other hand, is reportedly set to return to the Cleveland Browns after between eight and 10 games.

At first glance, that might seem like a step in the right direction for those who think that beating a woman is worse than smoking weed. However, the damage-control measures are far too little and too late.

For starters, Gordon's eight-to-10-game punishment is still more than the six-game ban that the new domestic abuse policy prescribes. Even though Gordon is considered a multiple offender—he was kicked off Baylor University's team in college for positive marijuana tests and served a two-game suspension last season for testing positive for the banned substance codeine—handing down suspensions that both range at around a half season shows that the NFL sees little difference between violent and nonviolent crimes.

Further cheapening the change is the fact that the league still has one of the strictest, if not the strictest, marijuana policies of all the major sports leagues in the world. Despite the fact that the threshold for a positive marijuana test was more than doubled from 15 nanograms per milliliter to 35 ng/ml, it still pales in comparison to the MLB's 50 ng/ml, not to mention the Olympics' and World Anti-Doping Agency's 150 ng/ml. (American hero and documented pot smoker Michael Phelps may have never had the chance to become the most decorated Olympian of all time if the Olympics held the same draconian standards as the NFL.)

And what's still a mystery is that Gordon is suspended at all. His urine sample only registered 16 ng/ml, which is a mere one ng/ml in excess of the old positive threshold and less than half of the new limit.

Therefore, it would seem he should either still be suspended indefinitely, or not suspended at all. In the coming days, details about the new drug policy might clarify why Gordon still has to miss games, but it's hard not to see how this compromise as an attempt by league officials to appease critics while also maintaining that they didn't totally give in to public pressure.

Sports has been touted as a reflection of society's values—if not a precursor of what society is to become—ever since Jackie Robinson became the first black Major League Baseball player in 1947, more than a decade before the civil rights movement. Unfortunately, the NFL is manifesting the opposite phenomenon: In the last year, we've heard appalling stories such as Miami Dolphins players mercilessly harassing a teammate to the point where he had a near-mental breakdown, league ambassador Tony Dungy saying he wouldn't draft first openly gay player Michael Sam because he'd be a "distraction," and just this week superstar running back Adrian Peterson allegedly beating his child bloody with a tree branch—just to name a few headlines.

Instead of heralding the progress of civil society, the NFL seems to serve as a nasty reminder that racism, bullying, domestic violence, child abuse, and anti-homosexual sentiments are still acceptable to a large part of the country.

The league had a chance to start changing this perception last week, but unfortunately it dropped the ball by maintaining that smoking a joint is a comparable offense to beating a woman unconscious.

Ken Silva is a freelance journalist.