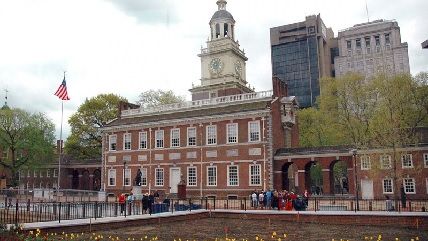 In 2010, Philadelphia's district attorney, Seth Williams, announced he would be easing prosecution of small-time marijuana offenders, moving to summonses instead. By 2011 the policy had saved Philadelphia taxpayers about 2 million dollars. Nevertheless marijuana remained criminalized and police continued to target suspected marijuana possessors in their policing.

In June of this year, the Philadelphia city council voted to legalize marijuana.  Michael Nutter, the term-limited mayor of Philadelphia, didn't address the bill all summer. Now he says he'll sign it, if it's changed. Nutter wants a separate offense for public use of marijuana, something the DA dismissed as ineffective back in 2010. "We can't declare a war on drugs by going after the kid who's smoking a joint on 55th Street," Williams said then. "We have to go after the large traffickers."

The new penalties for possession of an up to an ounce of marijuana would be a court appearance and a $25 fine but no criminal record. Public use would be punished with a $100 fine or community service.

Councilman Jim Kenney (D), who sponsored the bill, says it's necessary because of the number of people the government is "putting in the prison pipeline, and the poverty pipeline." Removing the criminal offense may close some segments of the prison pipeline, but a $25 or $100 fine means the poverty (and government revenue) pipeline remains open. Petty law enforcement, even of the "non-criminal" variety, can trap people, especially the poor, in a cycle of escalating fines and court appearances, a lesson not everyone's been able to draw from events in Ferguson and the subsequent scrutiny of St. Louis area law enforcement "fiefdom" like approach to petty law enforcement.