Democratic Political Mush Vs. GOP's Three Branches and a Twig

Which factions will dominate the two parties as 2016 approaches? 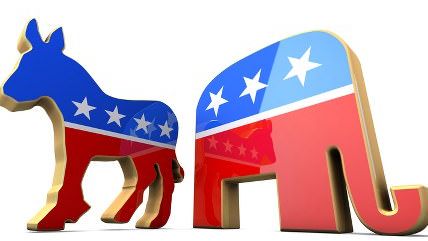 Placing either of America's two big-tent parties into a single ideological box misses historical and contemporary cross currents that buffet Democrats and Republicans to the left, to the right, and back toward the center. In the second decade of the 21st century, there are at least two wings of the Democratic Party, and three branches, plus a twig, of the GOP.

Divisions in each party help define their ideologies-of-the-moment. Political historian James MacGregor Burns, who died at almost 96 in July, described them as the congressional and presidential "parties" in his 1963 classic, The Deadlock of Democracy: Four-Party Politics in America.

A partisan Democrat in the Progressive Era tradition, Burns himself reflected how fluid ideology can be in American politics. Progressivism was an outgrowth of the late 19th century reform wing of the Republican Party, embraced by Democrats under Woodrow Wilson.

In addition to the congressional and presidential factions, there are others:

(2) Parties in the electorate—rank-and-file voters, some intensely interested, others weakly aligned, often organized as identity groups;

(3) Parties as ideology—liberal, conservative, libertarian, centrist and rump groups, like the Tea Partiers and Occupy Wall Streeters, with adherents sometimes focusing on only one, or maybe two, of the three elements of public policy in which they are most interested: economic, social and foreign (e.g., "anti-war Democrats," and "religious conservative Republicans;" and

(4) Parties within political geography—national, state and regional, e.g., the once "Solid Democratic South" or the "Rocky Mountain West Republicans."

Each party is sometimes divided into only a few factions, as a function of sustained winning and the spoils and unity fed by hubris. But often a party has multiple warring wings, from prolonged periods of defeat, which—for survival—eventually focus attention in the manner described by Dr. Samuel Johnson: "…when a man knows he is to be hanged in a fortnight, it concentrates his mind wonderfully."

The (recently) winning party, with the presidency and at least one house of Congress, indeed shows signs of big government liberalism. But Democrats also have a pragmatic branch, the "New Democrats," spawned by losing in the 1970s and 1980s and who then paid more attention to their pollsters and media consultants than to any "old time (liberal-Progressive) religion," to cobble together victories. Bill Clinton did so by co-opting conservative positions like welfare reform, strong defense, and crime control.

In the various state Democratic parties, where social issues like gay rights cut in different directions, New Democrats have been tolerant of candidates with views differing from "national Democrats." The military-industrial complex's K Street lobbyists seduce both "liberals" and New Democrat legislators, trumping the non-interventionism of Democratic leftists in the electorate. And investment bankers often buy-off both congressional and presidential Democrats, while statist activists man the ramparts at "Occupy Wall Street" rallies against the "one percent."

These intra-party relationships are "complicated," as they say on Facebook. But I would argue there are two basic factions now in the Democratic Party:

(1) The Progressive Era throwbacks: big government, statist liberals, in denial about failures of the New Deal and Great Society, who gave us Obamacare, ironically with its sell-out to Big Insurance and even Bigger Pharma. This faction also includes anti-war, non-interventionists in the electorate, and social-cultural liberals in the congressional and presidential wings, as well as in the electorate.

(2) Centrist, but not-so-New (anymore) Democrats: they tilt interventionist in foreign policy, much like the Warrior Princess, Hillary Clinton, who mutters phrases like "America, the indispensable nation." Centrists are less anti-business, and in fact many are allies of Wall Street crony capitalists, not friends of free markets. Most New Democrats now fall in line with social-cultural liberalism, since Democrats won the culture war.

The GOP's three branches and a twig

The three branches and a twig factions of the GOP are right now much more interesting, because the GOP has been on the ropes, at least nationally, and is fighting internally for what is sometimes called the "soul of the party," a rallying cry of losers, who want to claim they—and only they—have the formula for getting the party back on track.

Here are the current four parts of the out-party:

(1) Main Street/Wall Street conservatives. They are typified by that old-time (ex-Sen.) Robert Dole. They want to balance budgets and avoid an excessively regulatory state—except when K Street comes pleading for special favors. Newt Gingrich once called Dole "tax collector for the welfare state." (I yell that at parking enforcement officers in the District of Columbia, where it takes a lot of quarters to fund corruption.)

(2) Social-cultural conservatives. Mostly centered regionally in the Christianist, reliably Republican South, they have the national GOP by its elephantine cajones. The "Soc-Cons" turn off the center of the electorate, but demand party allegiance because they vote two-thirds GOP. That's not quite the 90 percent-plus African-American vote enjoyed by Democrats, but enough that they expect to be rewarded with important GOP platform planks. They are also reliably militarist.

(3) Libertarian holdouts. Some traditional Goldwater libertarians have stuck with the party, because they feel they can rely on Republicans for more free market sensibility. But many have been turned off by oxymoronic "big government conservatism." They are often centrist, even tilting left on social issues, though some (many younger) have deserted the GOP and become independents, including those shunning foreign interventionism.

(4) Neo-Con twig. Not a full branch, the neo-conservatives punch above the weight of their tiny band of Billy Kristol and his various Kagan acolytes, because of close alignment with the powerful military-industrial complex and the American Israeli lobby. They populate conservative think tanks and are read disproportionately on neo-con editorial pages, like that of The Washington Post, which give aid-and-comfort to America's elective wars, Bush's Iraq invasion, and Obama's Afghanistan surge. The Neo-Cons infuriate traditional conservatives and libertarians, with their big government domestic policies, typified by Part D prescription drugs for greedy geezers adopted under George W. Bush.

The hubris of recent victory has turned both factions of the Democratic Party into a kind of electoral politics-and-policy, hang-onto-power mush. Seemingly settled for 2016 on the personification of that weak porridge, Hillary Clinton, the Democrats' best hope is that the four Republican factions cannot resolve in-fighting and fail to put up a candidate with a chance of uniting the parts, while also appealing to the broad center.

But the prospect of an additional defeat in 2016 could stir a "New Republican" emergence, a GOP version of Bill "Slick Willy" Clinton of 1992. Sen. Rand Paul could be a catalyst for such a candidacy, but probably not its personification.

Call me crazy, but my money's on Romney-Ryan redux—or a similar team (the writer said, hedging his bet).

Terry Michael, a former Democratic National Committee press secretary, is director of the Washington Center for Politics & Journalism. He blogs at www.terrymichael.net.