In Detroit, Democracy Isn't Worth Saving—Privatize It All

There's a great case to be made that large swaths of the city should be turned over to private individuals with better ideas and management skills. 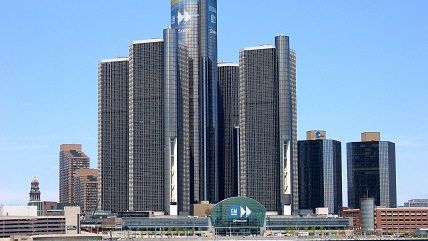 The recent water crisis in Detroit has brought renewed attention to the plight of the city, where many residents have not paid their water bills and are in danger of having their pipes shut off. It's just one symptom of the disease that's all but killed the now bankrupt Motor City.

That solution has rankled some on the left, who seem to have rediscovered the concept of federalism now that they have an instance of a Republican-controlled government taking over a smaller municipality. Sally Kohn wrote in The Daily Beast that the state takeover of Detroit amounts to white Republicans stripping black people of their autonomy:

So in the fall of 2013, Detroit voters went to the polls to elect a new mayor and City Council, but it didn't matter. The powers of the mayor and City Council have effectively been suspended. Detroit's emergency manager, Kevyn Orr, appointed by Snyder, has all the power and then some. A Democratic city that elected Democratic leaders is now controlled by the appointee of a Republican governor.

Or, to put it differently, Detroit—a majority African-American city—is now controlled by a governor elected by a majority of white voters in the state. It really doesn't matter that Kevyn Orr, the state-appointed emergency manager, is black, nor that Mike Duggan, Detroit's mayor, is white. What matters is that half of the state's black population lives in Detroit. So through the state takeover, "half of black Michiganders have essentially lost the right to vote," says Ife Kilimanjaro, co-director of the East Michigan Environmental Action Council.

I'm sympathetic to this argument. Local actors are typically better positioned to address their community's needs, and mandates handed down from on high by distant government bodies are often ill-advised. By the same logic, Kohn must surely oppose the Affordable Care Act as an unjust usurpation of states' sovereign right to set their own healthcare policies? Alas, no: Kohn found 317 million reasons to support the law.

Writing in The New York Times, Yale University philosophy professor Jason Stanley bemoans that the imposition of an emergency manager has stripped Detroit residents of their "freedom and equality." Woe to our democracy:

The Nazi political theorist Carl Schmitt was a fierce critic of liberal democracy. He argued that liberal democracy was incoherent because of what he called the problem of the exception. In emergency situations, there is not enough time to act democratically. In an emergency, someone would have to declare an exception to suspend the normal democratic process and handle the emergency. Schmitt argued that whoever had the power to declare an emergency situation and override the democratic process would be tempted to overuse that power, and declare nonemergency situations to be states of exception. This person would be in effect the sovereign.

The language of the emergency manager laws is that of exception. Calling the situation an "emergency," and the undemocratically selected financial manager an "emergency manager" is nothing other than a declaration of the anti-democratic nature of what has occurred. Detroit does not face an immediate threat from a hostile invading army. To suppose that financial exigency or advancing an agenda of privatization for corporate gain are reasons to suspend democracy is to capitulate to its worst enemies.

Okay, democracy has been suspended. Meh?

I will note that prior to state intervention, Detroit languished for decades under extremely corrupt but technically democratic (and also Democratic) management. Its city officials—from the lowest public employee to the mayor—were not merely criminally negligent but also negligent criminals. Evil bureaucrats bribed, stole, and swindled Detroit into utter ruin. It seems inhumane to me that anyone could think this result was what city residents deserved as long as some chunk of them cast ballots authorizing it on behalf of everyone else. What about all the people who didn't approve of their city government's criminal dealings?

Now, if people like Kohn and Stanley are actually suggesting that Detroit suffers from too much big government planning, I could work with that. Indeed, there's a great case to be made that large swaths of the city should be turned over to private individuals with better ideas and management skills. Privatization of city services is actually one of Orr's goals, and I look forward to the day when neither the state nor the local government has much say over how city affairs are conducted.

That's not what these left-leaning critics of the emergency financial manager law are suggesting, of course. It seems they aren't too concerned leaving Detroit to rot under the corrupt tutelage of Kwame Kilpatrick, Monica Conyers, or some other crime lord, as long as precious democracy is maintained (in this case, at least).