If Colleges Are Skeptical of Common Core, It's Probably Because the Standards Are Awful

Universities may be hesitant to put blind faith in Core-certified students, since teachers played almost no role in the development of the standards. 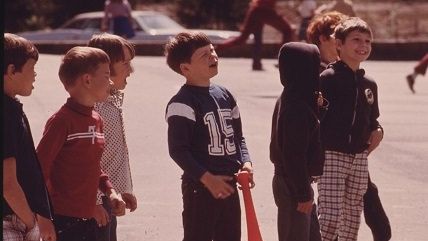 As the tide turns against the national Common Core education standards, its backers are desperate to recruit new supporters and keep the momentum on their side. Enter the Core-supportive New America Foundation, which has just released a report urging colleges to get on board with the standards and their related testing requirements.

Lindsey Tepe, a program associate at NEA, authored the report, which gives a detailed history of the development of Common Core. Tepe is particularly concerned that colleges are just going to ignore the standards, even though everyone who passes a Core-aligned test is supposed to be "college and career ready." From the report:

Arkansas is not even considering integrating its high school assessments with its admissions criteria. If that remains the case, the state's college-ready assessments will have no bearing upon a student's actual ability to attend one of the state's four-year universities.

This approach will not make sense moving forward. A college-ready designation on the state-adopted, Common Core standards-aligned PARCC assessment should be sufficient to meet state minimum eligibility criteria for unconditional admission to the state's public universities. While students may always choose to take additional assessments—as many currently do by taking both the ACT and SAT—they should not be required to jump through multiple hoops of assessment just to meet minimum standards.

Core backers are essentially saying that public universities should trust that Core-aligned standardized tests are sufficient to demonstrate student preparedness for a state university. They are getting ahead of themselves, however. Shouldn't the universities be the ones determining whether new K-12 standards are good enough to render a student college-ready?

The reality is that universities may be hesitant to put blind faith in Core-certified students, since teachers played almost no role in the development of the standards—a criticism made by Margaret Ferguson, a UC-Davis English professor and president of the Modern Language Association:

One of the troubling components of the [Common Core State Standards Initiative] is the stipulation that, once adopted, the wording of the standards cannot be amended, although states are allowed to add 15% more text. Major revision seems not to be envisioned by the framers of the document. In 2010, the MLA and the NCTE were invited to comment on a draft of the literacy standards as these were formulated both for specific grades and for students graduating from high school. A joint committee urged that revisions give more attention to the aesthetic dimensions of literature, the rhetorical aspects of writing, the advantages of knowing more than one language, and the ways in which new media shape literacy practices in the twenty-first century. The authors of the standards failed to incorporate most of the committee's suggestions. But the CCSSI, as teachers and students now encounter it on the Web, is a complex and generically hybrid text, open to interpretation and translation. Members of the MLA have been interpreting the CCSSI document since its initial rollout and have arrived at strikingly different conclusions…

To say nothing of the fact that the Core-aligned tests have a long way to go before they could be rightly viewed as fair assessors of college and career readiness. Students can't even pass them yet.

Common Core was designed at the behest of government bureaucrats by a small and secretive group of supposed education experts and then vigorously pushed by the federal government, which handed out bribes in the form of Race to the Top money to compliant states. Formulators and supporters shouldn't be surprised that their top-down approach to education reform has thus far failed to convince colleges—and teachers, parents, and students—of how they brilliant their fancy new standards are.

Read more from Reason on why "The Populist Uprising Against Common Core Is Libertarian and It's Winning" here.