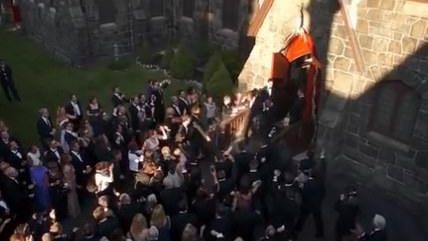 A New York congressman having his wedding recorded via drone has prompted new hissy fits from the Federal Aviation Administration (FAA), who is still insisting on the authority and ability to shove genies back into bottles and manhandle horses back into barns. And it has an amusing twist, the Associated Press notes. The congressman is on the subcommittee that oversees the FAA:

The agency's carefully worded statement doesn't mention Rep. Sean Patrick Maloney, D-N.Y., by name, but said it was looking into "a report of an unmanned aircraft operation in Cold Spring, New York, on June 21 to determine if there was any violation of federal regulations or airspace restrictions."

Maloney has acknowledged hiring a photographer to produce a video of his wedding using a camera mounted on a small drone. The wedding took place in Cold Spring on June 21. Maloney is a member of the House Transportation and Infrastructure Committee's aviation subcommittee, which oversees the FAA.

Top agency officials have testified extensively before Congress about their concern that commercial drones could collide with manned aircraft or injure people on the ground. Congress has been pressing the FAA to move faster on creating regulations that will allow commercial drones access to U.S. skies. The agency has been working on regulations for about a decade.

As I've previously noted, the FAA said it will be another decade or longer for those regulations. In the meantime, as this case shows, commercial enterprises are incorporating drones and resisting the FAA's efforts to leave them grounded for 20 years while it gets its act together. Maybe the FAA investigating the company that orbited Maloney's nuptials will prompt Congress to push for timely commercial regulations and not some poorly conceived, likely unenforceable, challenged in court, blanket ban. (But then I'm sure the regulations will be awful as well, with absurd licensing and fee schemes and rent-seeking up the wazoo.)

The most hilarious response to Maloney having a drone hovering over some church in New York comes from the reporting by the New York Daily News. They contacted the office of Maloney's challenger, Nan Hayworth, the Republican whom Maloney beat in 2012 to get into office. Proving there's absolutely nothing a candidate won't use to make his or her opponent appear dangerous or out of touch with the electorate, spokesman E. O'Brien Murray tosses on a pearl necklace and clutches away like nobody's business:

"Clearly Sean Patrick Maloney doesn't think that the rules apply to him, despite the fact that such rules come from the FAA that he helps oversee from his position on the Transportation & Infrastructure committee," Murray said.

'Unfortunately, this is exactly what people are so frustrated with when it comes to Washington politicians. Sean Patrick Maloney thinks he is above the men and women in the Hudson Valley he represents."

Well, the guy did manage to snag a fireworks show at his wedding as well, so there is that. At least they didn't gay-bait him (Maloney married a dude). Anyway, you can watch the actual drone video yourself below and decide whether this is anything for the FAA to get all upset about: