Hillary's Wealth Is Her Greatest Achievement

In Clinton's career, money is the only metric that features any success. 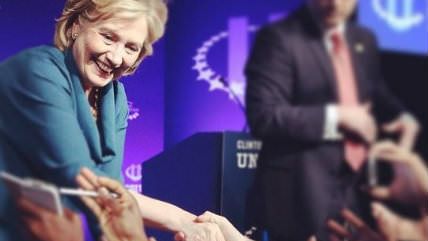 It's simply mystifying that so many Americans look to candidates who pretend to be just like them. We're the worst. In the rare instance I am moved to vote, the least I expect is for a candidate to be far more successful than I am.

This last hurdle is not particularly challenging, mind you. Which brings me to Hillary Clinton, whose clumsy efforts to convince America that she's a commoner not only are transparently silly but intentionally discount her most impressive gift: the ability to persuade rational people to pony up $200,000 (The Wall Street Journal says she was paid $300,000 for a speech at UCLA) to hear her talk about a career in politics. One thing's for sure: Those students would benefit far more from a talk about the inner workings of Clinton Inc.'s multimillion-dollar business than they will sitting through an hour of platitudes about public service.

If I had to pick a reason to vote for Hillary, it would be her wealth. She should own it. It's her greatest success. Through her speaking engagements and terrible ghostwritten books, she is worth somewhere between $25 million and $50 million. Bill's net worth is at least $80 million. Even combined, that's nothing like the Koch brothers' money—or even John Kerry's or Mitt Romney's money, as The Washington Post helpfully pointed out recently. (One thing wealthy folks don't understand is that the average American doesn't really make much of a distinction between $130 million and $1 billion anyway. You're just really rich. And it's OK.)

Nearly every candidate tries to create intimacy with the common man's struggles. Populists like to argue that the rich are incapable of comprehending the problems ordinary Americans face or of having empathy for the poor. This accusation is selectively deployed, of course. The Senate is teeming with affluent Democrats who are given a pass on their bank accounts because, as someone once explained to me, wealthy liberals advocate raising taxes on themselves and are therefore selfless. That means, conveniently enough, wealthy conservatives can always be dismissed as having ideas that are self-serving.

But the problem with Hillary isn't that she's wealthy. It's not even that she became wealthy asking for exorbitant fees while most Americans were living through a brutal recession. Nor is it that, for the most part, she has lived a privileged life under the protection of taxpayers for decades and still acts as if she's broke. It's that today she has nothing to offer voters but a reconstituted Obama-style populist progressivism that doesn't fit her history. She may well win, of course. But that would have more to do with the luck of history than it would her political skill.

Certainly, Hillary is more gifted at making money than she was at being first lady, a stint for her that featured a disastrous stab at health care policy and her husband's being tricked into having an affair by a shadowy conspiracy. She is undoubtedly a better businesswoman than she was a senator, as the single consequential vote she made turned out, in her own words, to be "a mistake." And she is a far better businesswoman than she was a secretary of state, a job for her that doesn't seem to feature any achievements worth remembering by anyone.

Chelsea Clinton philosophized recently that although she had wanted to see whether she could "care about (money) on some fundamental level," she couldn't. "That wasn't the metric of success that I wanted in my life," she explained. Though few people in the world want the sole metric of their life's triumph to be money, only someone with the security of a wealthy family, augmented by a $600,000 yearly paycheck, could dismiss the idea of money so flippantly. But she was right in another way. In the case of her mother's career, wealth is the only metric that features any success.