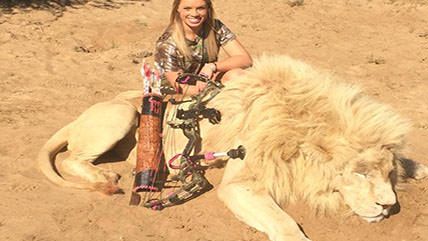 The 19-year-old Texas Tech University student has been attacked on her Facebook page for posting photos of herself posing with dead exotic animals she killed on African hunting trips. Currently, there are two petitions calling for her hide: the first one asks Facebook to take down the photos and the second asks for her to be barred from Africa.

Jones has defended her big game hunting saying that her kills are not only legal but they promote conservation efforts.

And you know what? She's right.

It seems counterintuitive: How can killing animals actually save endangered wildlife?

According to Reason Science Coorespondent Ronald Bailey we should look to the chickens:

The world is in no danger of running out of chickens. Yet the world has fewer and fewer elephants. lions, tigers, giraffes and so forth. Why? In part it is because no one owns wild animals and consequently they are nuisances rather than resources.

A 2005 paper in the Journal of International Wildlife Law and Policy provides evidence for this phenomenon:

The legalization of white rhinoceros hunting in South Africa motivated private landowners to reintroduce the species onto their lands. As a result, the country saw an increase in white rhinos from fewer than one hundred individuals to more than 11,000, even while a limited number were killed as trophies.

A study done by Peter Lindsey, a conservation biologist with the Univeristy of Zimbabwe in Harare, came to the same conclusion:

Trophy hunting is of key importance to conservation in Africa by creating [financial] incentives to promote and retain wildlife as a land use over vast areas.

Because contrary to what animal rights activists are posting on Jones' Facebook page, the primary threat to endangered animals is not trophy hunting. It's the destruction of the animals' natural habitats and poaching. And as conservationist Mike Norton-Griffiths points out, private ownership curbs both of these issues:

The economic driving force behind both these is the fact that for most landowners the returns available from agriculture greatly exceed those from livestock, so it pays them to plough up the rangelands. Everything is loaded against landowners making money from wildlife…

If Kenya wishes to maintain significant wildlife populations outside its protected areas, then it has to ensure that landowners can gain an income from wildlife that is competitive with what they can earn from agriculture and livestock.

Let the cheerleader hunt. She's saving our wildlife, after all.