If only he couldn't write his name yet! 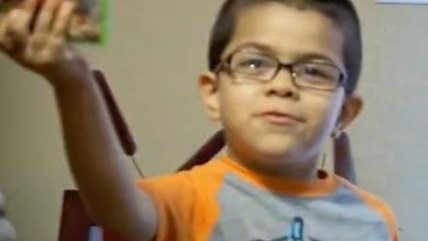 A kindergartner who pulled his pants and undies down on the playground after another kid told him to do it was hauled off to the principal's office and forced to sign a "sexual misconduct" form.

If only he couldn't write his name yet! But little Eric Lopez of Surprise, Arizona (yes, what a name), knows his letters. So now he has a label and file that will follow him for the next 12 years. What he did not know—and of course, no one told him—was that he had a right to have his mom present. She didn't find out until after the forced confession, however, and has since filed a bunch of paperwork trying to appeal the label of "sexualized minor."

(The other child who had instructed Lopez to pull his pants down had given the boy no choice, by the way: He had told him that he would pull Lopez's pants down for him if he did not obey.)

The Dysart Unified School District insists that it was simply following standard procedures in the case of "indecent exposure," which is why at this point I must recommend everyone read Philip Howard's new book, "The Rule of Nobody." It talks about how we got to the point where officials believe they truly must follow protocol, even when they know it makes no sense, because this is only "fair." That's the outlook that has given us zero tolerance, three strikes and you're out, and mandatory minimum laws, as well as principals who think their only recourse when a five-year-old pulls down his pants is to label him a sexual deviant. Why is there no official form for labelling someone a "protocol fetishist?"

To watch an interview with Lopez and his mother, go here.

For more stories like this one, check out Lenore Skenazy's Free-Range Kids blog.