Pro-Russian Separatists Are Flying the Confederate Flag. Why? 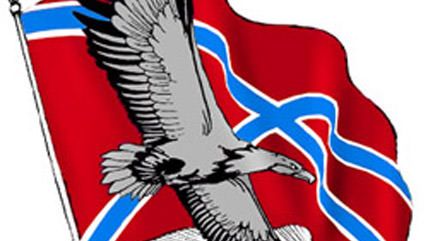 The self-proclaimed leaders of the so-called people's republic of Donetsk in eastern Ukraine are taking some tips from the U.S., but in a way that most people will not find palatable: They adopted a modified version of the Confederate Flag. It holds no meaning in Eastern Europe, so to whom are these Russian-backed fighters trying to appeal?

The flag of the unrecognized Novorossia ["New Russia"] confederation is not entirely identical to the banner of the Army of Northern Virginia, as it lacks stars. …

But otherwise, it is the same as the Confederate flag, a blue diagonal cross bordered with white on a red background. General Lee would have been proud.

The pro-Russian rebels, known for their dislike of all things American, do not take direct inspiration from the U.S. secession movement or fear the implications of separatist bad luck that their flag entails. …

The official news website of the separatist People's Republic of Donetsk, part of Novorossia, on May 31 credited Ukrainian political analyst Mikhail Pavliv with creating the "official banner" of the self-proclaimed territory.

Yet, Pavliv, a support of the insurgency, told The Moscow Times he had simply stumbled upon the flag online somewhere.

It doesn't make much sense that anti-Americans, who already have their own Russo-centric images, would start waving this loaded American artifact. For comparison, wouldn't it be weird if instead of calling themselves "the State of Jefferson," the breakaway group in California picked up a name from 1860s Russia opposition politics and called themselves "the State of Mikhail Bakunin"? Transplanted foreign symbols just wouldn't resonate with locals, and Russia has long seen itself as above the racial tensions of America embodied in the Southern banner.

Now, there have been a few incidents of Europeans waving the rebel flag as a banner of anti-tyranny, such as at the fall of the Berlin Wall and, in fact, when pro-Western Ukrainians deposed their corrupt, pro-Russian president earlier this year. But, again, this separatist movement is anti-Western.

The insurgents, by their own admission, don't know jack about Dixie and certainly aren't defending its heritage. A lot of them are just Chechen mercenaries, not history buffs. On the other hand, Moscow has a surprisingly effective propaganda machine that does know history and does direct itself at the U.S.

Americans, for many reasons, are divided about the conflict in Ukraine. There are some who are wary of stopping the spread of Russian oppression because they're more afraid of the U.S.'s imperialist tendencies. Some of those Americans are sympathetic to Vladimir Putin and praise his conservative manliness. Some of those Americans identify positively with the Confederate Flag and see Russia as a cultural ally. Does anyone hear a dog whistle?

Here's a video of the bizarre matchup.