Kid Twirls a Pencil in Class, N.J. Threatens to Take Him From His Dad and Requires Blood and Urine Testing 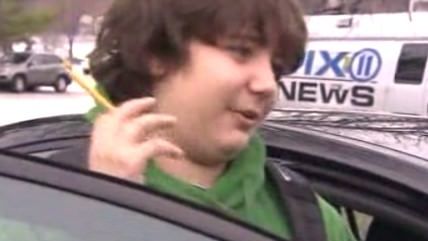 In April, Ethan Chaplin was twirling his pencil in class when another kid—a bully, according to Chaplin—called out: "He's making gun motions, send him to juvie!"

The 13-year-old was yanked out of school and thereby commenced his 15 minutes of fame as sites like Huffington Post, as well as local cable news stations, took up his cause arguing that a suspension for pencil twirling was zero tolerance run amok.

The Vernon Township school district's interim superintendent claimed Ethan had never been suspended, but conceded he had been out of school for two days, telling the New Jersey Herald:

"The story that we expelled or suspended a student is partially not true … We did exclude" the student from attending until a proper psychological evaluation was done, interim Vernon Superintendent Charles Maranzano [said.]…

If a student "demonstrates odd behaviors, non-conforming behaviors, it causes us to take a closer look," he told the newspaper. "If a student gestures or demonstrates behavior that could be construed as a threat to others in a classroom… then that's also a trigger for us."

Ethan was back in class quickly, but too often these zero tolerance cases have second- and third-order effects. In Ethan's case, long after they thought the incident was resolved, his dad received some very scary paperwork from the state of New Jersey threatening to revoke his custody rights:

"I received a letter from them saying they had found an incident of abuse or neglect regarding Ethan because I refused to take him for psychological evaluation," Michael said.

Panicked by the letter, Ethan's parents took him in for the evaluation, where he was required to give blood and urine samples.

No troubling psychological conditions were found (unless they've recently added "being an annoying fidget" to the DSM) but now the Chaplin family will likely endure a period of uncertainty and perhaps even home visits from social workers with the power to take away Ethan at any time.

Meanwhile, 13-year-olds may be idiots sometimes, but they're not dumb. Remember, the whole incident was triggered by a kid savvy enough to know that raising the specter of even a fake gun is a powerful weapon in the bullying wars.