Thanks very much, ruling elite. 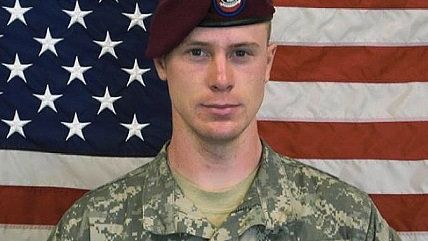 We live in angry times. For evidence, turn on any news program. An awful lot of people, led by right-wing politicians and radio and TV entertainers, are angry at President Obama for trading five Taliban officials, who have been held for years without charge in Guantánamo, for an American soldier, Sgt. Bowe Bergdahl, who apparently walked away from his post after having a change of heart about the War in Afghanistan. The Right is apoplectic.

To make matters worse for the right wing, Obama had the nerve to embrace the soldier's parents—on the grounds of the White House no less—who themselves are under suspicion by the Right. Bergdahl's father, after all, wears an ominously bushy beard (is the Calvinist really a Muslim?), and spoke to his son in Pashto, the language of his son's captors. Worse yet, he was so desperate to rescue his son that he tweeted to a Taliban spokesman, "I am still working to free all Guantánamo prisoners. God will repay for the death of every Afghan child, ameen." (The tweet was later deleted.)

Before his disappearance, then-PFC Bergdahl emailed disparaging remarks about the U.S. military and America itself after he saw a U.S. Army truck run over an Afghan child.

These people need help, yet what they get is the most conceited country in the world telling them that they are nothing and that they are stupid, that they have no idea how to live.… We don't even care when we hear each other talk about running their children down in the dirt streets with our armored trucks.… We make fun of them in front of their faces, and laugh at them for not understanding we are insulting them.… I am sorry for everything. The horror that is america [sic] is disgusting.

In response to this email, his father wrote, "In matters of life and death, and especially at war, it is never safe to ignore ones' [sic] conscience. Ethics demands obedience to our conscience. It is best to also have a systematic oral defense of what our conscience demands. Stand with like minded men when possible."

For the right wing, the Bergdahl matter confirmed every fear they ever had about Obama. This is where apodictic certainty born of nationalism and interventionism inevitably leads. If you believe in American exceptionalism and indispensability, you'll believe anything.

Obama's defenders were on no firmer ground, defending actions for which they had condemned George W. Bush, such as issuing signing statements announcing that the president would ignore parts of bills he signed into law. Obama's boosters would never have tolerated Bush flouting a requirement that he give Congress 30 days notice of some action (which Obama was supposed to have done before releasing Guantánamo prisoners). As usual, in politics the important thing is not what is done, but who does it. Republicans live by this standard too, of course.

The president's fans defended his POW deal (which I have no problem with), on the grounds that the War in Afghanistan is winding down and this is what happens with prisoners when wars end. Winding down? There will be 9,800 troops through next year, and the last troops won't leave before 2016. Without irony, Sam Stein of the pro-Obama Huffington Post said on MSNBC that the "war will be over in a matter of years." That must be great comfort to the troops and their loved ones.

Those who back Obama still can't bring themselves to say that the War in Afghanistan was stupid and that Obama's 2009 surge—which accelerated the casualties—was stupidity squared.

My head says that I should sit back and watch with satisfaction this fight between conservatives and progressives. Both sides share the same flawed premises, so let them go at it until they fall down from exhaustion.

But my gut tells me that this fight will get even uglier than it already is, and its consequences bode ill for the future, because no one in the mainstream is willing to question the deepest premises of American foreign policy and its inevitable disastrous consequences. In the larger scheme, the Bergdahl exchange is a sideshow.

Mainstream U.S. foreign policy, whether the Wilsonian neoconservative "humanitarian" interventionism or its so-called realist variant, produced the conditions that made Americans the targets of terrorists. It then dictated the response—Bush's "War on Terror"—which made things even worse. If things don't change, we have strong reasons to fear for the future. Al-Qaeda and its offshoots are not on the run. They have gained ground, from Iraq westward to Syria and Lebanon, southward to Yemen, across northern Africa, and again southward to Mali and Nigeria, where Boko Haram conducts its reign of terror. And let's not forget Somalia's al-Shabaab in the Horn of Africa to the east.

Obama boasts that bin Laden is dead. But in practical terms, what does that mean? Not very much, writes Patrick Cockburn, who has reported from the Middle East for years:

Unsurprisingly, governments prefer the fantasy picture of al-Qa'ida because it enables them to claim a series of victories by killing its better-known members and allies. Often, those eliminated are given quasi-military ranks, such as "head of operations," to enhance the significance of their demise. The culmination of this most publicised but largely irrelevant aspect of the "war on terror" was the killing of Bin Laden in Abbottabad in Pakistan in 2011. This enabled President Obama to grandstand before the American public as the man who had presided over the hunting down of al-Qa'ida's leader. In practice, his death had no impact on al-Qa'ida-type jihadi groups, whose greatest expansion has been since 2011.

The resurgence of these jihadis is most striking on the ground in Iraq and Syria, but is evident in Afghanistan, Libya, Somalia and, in recent months, Lebanon and Egypt. In Iraq, it was a final humiliation for the US, after losing 4,500 soldiers, that al-Qa'ida's black flag should once again fly in Fallujah, captured with much self-congratulatory rhetoric by US Marines in 2004. Aside from Fallujah, Isis, the premier jihadi movement in the country, has rapidly expanded its influence in all parts of Sunni Iraq in the past three years.

America is not winning the War on Terror. It was unwinnable from the start, primarily because its origins and nature were viewed through a distorting nationalist and imperialist ideology and thus were badly misunderstood. As a result, the U.S. government has killed countless innocent Muslims, seen the lives of thousands of young Americans snuffed out or ruined, and squandered obscene sums of money.

And what's to show for it? A growing and spreading movement of extremists who want revenge against Americans. Thanks very much, ruling elite.

While reasonable people wouldn't call that success, bin Laden might have. Even in 2004, he pointed to "evidence of the success of the bleed-until-bankruptcy plan." That is, he had succeeded in drawing the United States deeper into the Muslim world, especially Afghanistan (the bane of earlier empires), because that was right where he wanted America. Iraq was icing on the cake, compliments of Bush, since it gave Arab jihadis a place to fight Americans and learn their trade, which they could later use in Libya and Syria—strangely, with American assistance.

Dead or alive, Osama bin Laden is the greatest strategist in the history of human conflict. With no navy or air force or anything that resembles a formal army, he's managed to whip the world's mightiest nation like a rented camel. Our economy is shot, the best-trained, best-equipped military in history has been proven impotent, and our moral standing in the world has gone through the sub-basement.

Michael Scheuer, once head of the CIA's bin Laden unit, said much the same thing in 2004: "I think it is fair to conclude that the United States of America remains bin Laden's only indispensable ally." (He wrote that in his book Imperial Hubris: Why the West is Losing the War on Terror.)

The conventional wisdom is that terrorists struck on 9/11 (and earlier), while we were minding our own business. Since, according to this story, it was unprovoked aggression against our freedom and affluence, the only proper response (we were told), was overwhelming force to eradicate the terrorists. But since that response only aggravated the unacknowledged cause, the result has been the opposite of what was promised.

The conventional wisdom is wrong. "Bin Laden has been precise in telling America the reasons he is waging war on us," Scheuer wrote. "None of the reasons have anything to do with our freedom, liberty, and democracy, but have everything to do with U.S. policies and actions in the Muslim world." He was referring to U.S. support for corrupt oil-rich kings and dictators and the enabling of Israel's injustices against the Palestinians.

When you understand what Scheuer and others have been saying, you realize that the wars in Afghanistan and Iraq and the drone murders and covert actions in so many other countries are self-defeating for the American people, though not for those who profit from war in terms of power and lucre.

The policymakers didn't go into Afghanistan to win—no one could have been that delusional so soon after the Soviet defeat. They went in to show the American empire's power and resolve, and to reestablish political and economic dominance in that part of the world. They failed on all counts.

Things will look no better in 2016, so they might as well leave now and save the lives that will otherwise be lost.