L.A. News Piece on Uber Highlights Its Dangers, Which Appear to Be the Same as Taking Taxis 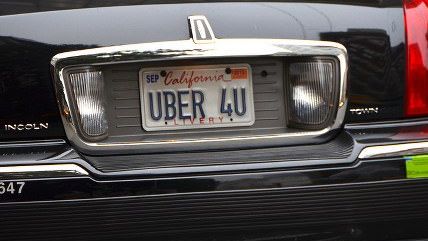 When you call a ride-sharing service, you're accepting a ride from a stranger! Oh, sure, you can say the same when call a cab or even ride a bus, but the NBC affiliate in Los Angeles wants us to see this is as something different or sinister somehow. Last night, it aired "Risky Ride: Who's Behind the Wheels of Uber Cars?" The piece aims to terrify us all with the idea that these strangers may have criminal backgrounds and questions the thoroughness of the company's background checks.

To illustrate the problem, they got Beverly Locke to apply to become an UberX driver. Locke is an ex-con with a "20-year rap sheet [that] includes burglary, cocaine possession, and making criminal threats with the intent to cause death or bodily injury." She says she's reformed now and wants to "make up for her past." She passed the background check and was hired as a driver. NBC filmed her getting her first call for a pickup but then had the passenger cancel, as if after getting Locke's participation and filming her they thought she'd just beat up or rob the guy anyway.

NBC also tracked down a local couple that had a very bad experience with an UberX driver. He brought them home from an airport, dumped their luggage and then raced off with the couple's briefcase, purse, iPad and wallet in the back. When they contacted him (on Uber you can directly get back in touch with your driver), he apparently refused to return their stuff and that he was not responsible for items left in their car.

Without defending Uber, doesn't this sound like a familiar experience for anybody who has left anything behind in a taxi? NBC notes that when the couple contacted Uber, the response was that the drivers were not Uber employees but private contractors. This is treated like an important critical problem. But the Uber response also says that they're "deactivating" the driver and keeping him from accepting more passengers and said they'll cooperate with police. The NBC report ignores this part of Uber's response (I had to freeze-frame the television report to read the e-mail shown), which is pretty shady.

It's obvious that the point of the NBC expose is to suggest that cab drivers, with their heavily regulated system and fingerprinting, are safer, and so Uber passengers are taking on additional safety risks in exchange for saving a few dollars on a trip. Regulation saves us! But a Google check will find instances of the exact same problems with "licensed" taxi services. In January, Pando.com did take a look at some of Uber's problems with background checks and attempts to figure out how Uber might be missing crimes it should be catching (answer: it depends on the quality of the background checks).

As Uber is getting more attention, it's getting more criticism. Arguably that's a good thing. Uber providing a valuable service customers want doesn't make it a saint, and sometimes its response to competition can be as problematic as those of the entrenched taxi companies. NBC also notes that Uber is far from the only ride-sharing service out there. If Uber does not do a good job at protecting the safety and property of its customers, then competitors, including traditional cab services, will be able to push them out of the market. This is true regardless of how much regulation local governments push on them.