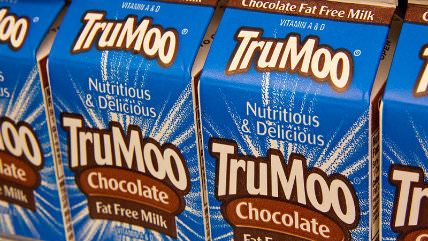 Take chocolate milk away from school kids and they'll simply drink regular milk instead, right? Well, no, and a new school lunch study proves it.

The study, published in PLOS ONE, looks at data collected from 11 Oregon elementary schools where chocolate milk was banned from cafeteria sales. The idea behind these bans was to get kids to switch from chocolate milk to less sugary and more nutritious options, such as regular milk. Wanna guess how that turned out?

According to Cornell University researchers, the chocolate milk ban resulted in students buying 10 percent less milk overall and wasting 29 percent more of the milk they did purchase. At the same time, the school district saw a 7 percent decrease in overall lunch program participation, which may also be related to the chocolate milk ban.

Students at these Oregon elementary schools did wind up consuming less sugar and fewer calories, the researchers note. However, they also consumed less protein and calcium overall.

"There are other ways to encourage kids to select white milk without banning the chocolate," said researcher Brian Wansink, who advocates more of a "nudge" approach to changing school lunch choices: "Make white milk appear more convenient and more normal to select."