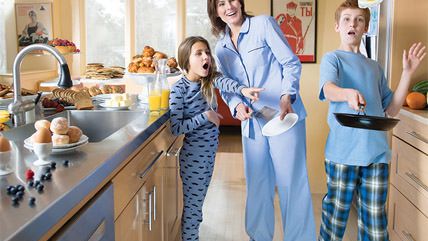 This fact was accidentally revealed in, of all places, the latest issue of Washingtonian MOM magazine. The journal did a profile on Carney's wife, Claire Shipman. There's a lot of fun facts about Carney's preferred brand of $275 sneakers (Hugo Boss) and how the family's Portuguese water dog is related to Obama's (cousins!).

A few sources picked up on some non-sequiturs, though. Can you spot the strangest thing about this totally candid picture? Hint: It's not that each member of the Carney clan eats a pyramid's worth of food for breakfast.

Rather, it's the World War II-era Soviet poster pointing over Shipman's shoulder, which asks if you've enlisted in the Red Army yet (because you're going to get drafted anyway), and the other one beyond the sink, which asks if you've gotten a factory job to fill in for your husband (who has probably been shot on the front lines).

In another picture, the family has what appears to be a bust of the U.S.S.R.'s last leader, Mikhail Gorbachev. As a bonus, whoever poorly photoshopped the Carney library for added girth accidentally cloned his son's finger.

Why does Carney decorate with reminders of one of the most murderous governments in history? In case you've been slacking off on your White House personnel trivia, prior to dodging questions for the Obama administration, Carney worked as a journalist in Moscow. He and Shipman met there.