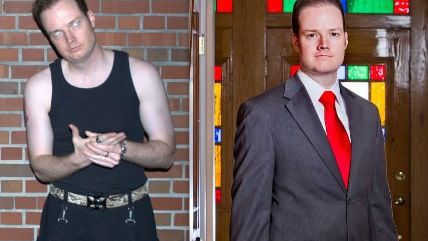 Republican Jake Rush stands for typical conservative causes like reducing government spending, securing the borders, maintaining a strong foreign policy, opposing abortion, and supporting gun rights. He's offering up a primary challenge to Republican Ted Yoho in Florida's 3rd District. Though Rush's site and campaign advertisement don't say exactly why he has a problem with Yoho's performance, Yoho is part of the libertarian-leaning Republicans endorsed by Ron Paul prior to his upset victory in 2012. He has joined up with other recognizable libertarian-leaning Republican representatives like Justin Amash (Mich.) and Thomas Massie (Ky.) to oppose military action in Syria and Egypt. Rush's site warns against American "isolationism" and calls for a "proactive foreign policy."

Rush also says on his site, "We should be focused like a rifle, not on sideshow issues," so of course it turns out Rush plays role-playing game where he pretends to be a vampire and of course that all comes out now. Jake Rush has an alter ego named Chazz Darling, and he's a member of the Mind's Eye Society, a group that hosts Live Action Role-Playing (LARP—one of the most fun acronyms to say in the world) sessions based on the modern fantasy gothic settings of role-playing game company White Wolf. Popular around the time novelist Anne Rice was popular in the 1990s—and for similar reasons—White Wolf published role-playing game guidelines for bringing horror characters like vampires, werewolves, and ghosts into modern settings. (Full disclosure: I did back in the '90s play Vampire: The Masquerade for about a year, but did not engage in any LARPing.)

Rush's hobby was revealed on SaintPetersBlog, where his behavior is described as a "bizarre double life" and Peter Schorsch's reporting of Rush's gaming reads like the role-playing gaming panics of the 1980s, where misguided adults thought teens were actually trying to cast magic spells from Dungeons and Dragons in the basements and dens of their family's suburban homes. Here's a sample of Schorsch describing Rush's role-playing:

Chazz Darling appears to be one of Rush's favorite personas. As Darling, Rush published regularly in both the Camarilla Wiki Project, a wide range of message boards and sites connected with White Wolf Publishing, the company which created the first Vampire: The Masquerade role-playing game in 1991.

Rush is certainly living a double life, one that would rival Jekyll and Hyde—except it is all too real.

As a Gainesville native with a degree from the University of Florida and a 2007 graduate of Stetson Law School, Rush—at the same period as his life in Camarilla—served in the Florida Bar as the Young Lawyer's Division Board of Governors representative for the Eighth Judicial Circuit.

It is not "all too real." It is a game. In retrospect, it's funny how panics about role-playing gamers turned out to be a lot of projection. It turned out that the people who attack gamers are often the ones who were often unable to determine the difference between reality and fantasy. Kids playing Dungeons and Dragons probably never thought the spells were real (if only!) but certainly religious objectors to the game did and thought they were tools of Satan.

Rush's hobby got picked up and reported by a number of sites. Rush subsequently sent out a statement defending his activities, describing and owning his background in gaming and theater:

As a practicing Christian, I am deeply offended that the opposing campaign and their supporters would take a gaming and theatre hobby and mischaracterize it. The very definition of acting is expressing ideas and thoughts that are not your own, just like I don't believe I am MacBeth, which I have played, I am none of the characters….

Bottom line—There is nothing wrong with being a gamer. It's kinda nerdy, but North Central Florida deserves a legitimate debate on the issues instead of Ted Yoho's usual sideshow distractions.

He also included a totally awesome picture of himself dressed up as The Flash from D.C. Comics and his wife as Phoenix from Marvel's X-Men.

Libertarians may disagree with Rush's foreign policy views, but good for him for not being embarrassed by a hobby enjoyed (though perhaps not as intensely) by millions of Americans. This allegedly strange, mysterious game Rush participates in had enough of a following to inspire a television series back in 1996 called Kindred: The Embraced, though it didn't have quite enough of a following to last even a whole season. Given the current popularity of Twilight, True Blood, and The Vampire Diaries, it's really silly for the media to be playing dumb about all this.

In the event Rush actually makes it to Congress, he won't be the only gamer there. Our upcoming June issue of Reason focuses on the "Rise of the Gamer." Though the issue is focused mostly on video games, certainly the connection between table-top gaming and video gaming is strong (there have also been video games based on this same vampire setting). We have an interview with libertarian-leaning Rep. Jared Polis (D-Colo.), who talks about his background as a gamer, and how he ultimately used it to help fight against some bad copyright enforcement legislation. It doesn't appear that Rush and Polis will see eye-to-eye on many issues (if any), but maybe they'd be able to hammer things out with a few dice rolls or a game of Civilization.

Given the connection between Gen Xers (at 35, Rush is at the younger end of the generation) and games, we are likely to see more guys like Rush and Polis in the halls of political power. Rush may or may not have a chance against Yoho, but someday—maybe soon—Americans will be voting an imaginary vampire into federal office. This is assuming they haven't already.