State Department Spending $400,000 on a Camel Statue in Pakistan 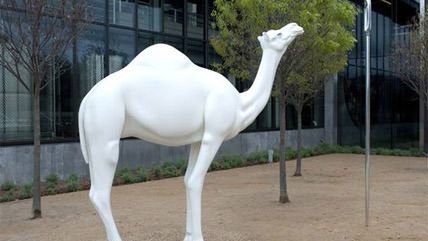 The State Department sure is in anguish from "deep" budget cuts (like every year). Heck, the cupboards are so bare, they even bled $30 million from the Fulbright Program this month. What can the department still afford?

How about a "500 lb. fiberglass, aluminum, stainless steel, acrylic and painted"statue of a camel to be put on display at the American embassy in Pakistan? And it only cost $400,000. And it's not even a one-of-a-kind work.

Buzzfeed got access to a document about the procurement of "Camel Contemplating a Needle" and has an exclusive report:

The work, by noted American artist John Baldessari, depicts a life-size white camel made of fiberglass staring in puzzlement at the eye of an oversize shiny needle — a not-so-subtle play on the New Testament phrase about the difficulty the wealthy have in entering the kingdom of heaven.

Personally, I thought the camel's expression was more like "a smug realization of its own sticker price," but I digress.

In a statement, State Department press spokeswoman Christine Foushee said the proposed purchase comes from the department's "Office of Art in Embassies." In new construction projects, she said, a small part of the total funds, about 0.5%, is spent on art purchases.

The State Department may have gotten a pretty good deal on the camel, since Baldessari has sold even less inspiring works for millions. But they could have done even better if they had opened the opportunity to competition. The department didn't do that though, insisting that only this camel could satisfy the "unique artistic criteria" for the embassy.