A Child's Guide to Politicians 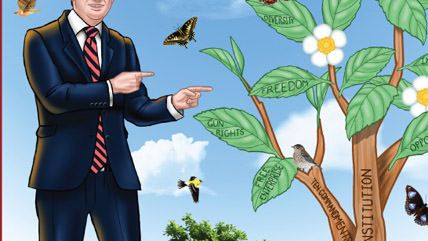 Ted Cruz to the Future is a text-heavy coloring and activity book for kids. It presents the Texas senator's views on the Constitution, Second Amendment, Obamacare, and other topics. It has a pro-Cruz tilt that keeps it from living up to its claim of being "non-partisan"-but is anyone picking up a Ted Cruz coloring book really looking for that?

The slim volume is part of an effort by the Really Big Coloring Books series to meet parents' demand for "modern day people in children's literature." Say what you want about bias in schools or the media, apparently there are coloring books for parents of every political persuasion.

Admire Cruz or dislike him, this book has clear social value: Kids can early on see politicians as two-dimensional, stiff-grinned suits who provide more entertainment than substance.