Divergent and Nymphomaniac: Volume I 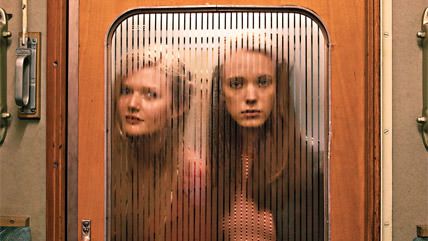 Judging by the trailer for Divergent, you'd figure the movie must be a bucks-grubbing knockoff of The Hunger Games. But that was unavoidable. Like Suzanne Collins' three Hunger Games books, Veronica Roth's Divergent trilogy tells the story of a post-cataclysm society trapped in an oppressive, walled-in dystopia, and a rebellious teenage girl's determination to break away to freedom. This movie version of the first of the Roth novels follows the book quite closely. And its star, Shailene Woodley, with her soft, rounded features and sweet charisma, bears some resemblance to Jennifer Lawrence, the heroic Katniss of the Hunger Games films.

But Divergent is a bit more than a Hunger Games-wannabe. The plot has enough distinctive elements to set it apart from the earlier movie, and director Neil Burger (The Illusionist and Limitless) proves himself an action man with a strong feeling for character detail. As for Woodley, she could well be on the verge of a career breakthrough of Lawrencian dimensions.

The story is set in a blasted and rubble-strewn Chicago, 100 years after a war that wiped out most of the rest of humanity (or so it's said). Inside the towering wall that surrounds the city, people are divided into five factions, each dedicated to a different social value. The Abnegation tribe is selfless and helpful. Members of Amity are devoted to kindness (of an overbearing sort). Candor is distinguished by an unfiltered honesty. The Erudite are super-brainy. And the Dauntless are warriors, the city's intrepid defenders.

Woodley plays Beatrice (Tris for short), who was born into the Abnegation faction. She loves her parents (Tony Goldwyn and Ashley Judd), but feels there must be more to life than dreary homespun clothing and endless do-gooding. She yearns for adventure, which is not long in coming.

Tris has just turned 16—the age at which all children must undergo a test to determine their personality orientation. At the test's conclusion, they can choose either to remain with their home faction or to join another one to which they're more suited. Immediately there's a problem. Although a sympathetic test administrator marks Tris' results as unclear, they're actually anything but. Her strengths are several, beyond the confines of any one faction. She's a Divergent, which in this world is a death sentence. As pronounced by Jeanine Matthews (Kate Winslet), the scheming Erudite leader, "The future belongs to those who know where they belong." Tris keeps her dangerous secret to herself, and opts to join Dauntless.

The movie is naturally aimed at a specific demographic, but it doesn't pander too cravenly. With The Hunger Games no doubt strongly in mind, its producers surely hope that a broader audience can also be drawn in, and well it might. Woodley is impressive in depicting a character who evolves from a girl with little knowledge of the world into a young woman who's ready take it on. She's also a born kick-ass. At the Dauntless training facility, Tris is faced with a number of grueling challenges—boxing, knife-fighting, marksmanship, and unending derision from some of her fellow trainees, particularly a loudmouth named Peter (Miles Teller, Woodley's costar in The Spectacular Now). She's hopeless at first, but quickly improves under the tutelage of a mysterious trainer called Four (Theo James). Soon she's leaping and kicking and punching and shooting and generally tearing up her luckless opponents. (Very convincingly, too—Woodley did most of her own stunts.)

The movie inevitably ends on a tentative note, leaving key questions wide open. What unseen elite actually runs the big city? And if most of the rest of the world has been destroyed, what is the big wall intended to be a defense against? All will of course be made clear soon enough. Insurgent, the first of two sequels, is already headed into production.

Charlotte Gainsbourg, in her third go-round with Trier, plays Joe, the titular sexpot. We come upon her lying beaten and bloody in an alley, where she's discovered by a timid soul named Seligman (Stellan Skarsgård). He takes her back to his humble apartment, feeds her tea and rugelach, and listens patiently as she relates her action-packed sexual history. After some tender reflections on her father (Christian Slater—an eccentric bit of casting) and memories of schoolgirl arousal with a gym rope, Joe moves on to her teen years. (In these sections, which constitute most of the movie, she's played by Stacy Martin, a coltish Anglo-French student/model whose expressive abilities, unlike her body, remain unrevealed throughout the picture.)

Burdened by her virginity, 15-year-old Joe approaches a hunky lad named Jerôme (Shia LaBeouf) to relieve her of it. "You should probably take off yer knickers," he tells her. (The future of transatlantic amity may hinge on dissuading Shia from ever again attempting an English accent.) Set free, she next enters into a contest with a girlfriend—a competition on a train to determine who can shag the most strangers in a lavatory. Joe wins by draining a reluctant gentleman of the precious bodily fluid he was planning to take home to his ovulating wife in hopes of launching a long-sought pregnancy. (This slurpy scene, boldly imagined, is actually quite touching.)

It's hard to say what Seligman makes of all this. He's not aroused by Joe's wild tales about taking on 10 different men a day, rutting through the years with Jerôme, or having it off with a hospital orderly on a visit to her dying father. Seligman is only stirred to metaphor. He sees her as a larval insect—a nymph—struggling toward metamorphosis. He digresses all over the place. He has a theory of fingernail-cutting as a guide to character (no kidding), and evocative thoughts about polyphony, Palestrina, and the Devil's Interval. When Joe describes one extended sexual encounter—doing it three times one way and then five times another—he brings up the Fibonacci thing.

Trier is an avid digresser himself. At one point, he presents us with a sudden montage of droopy penises; at another, for reasons obscure, there's a diagrammed guide to parallel parking. Working again with Melancholia cinematographer Manuel Alberto Claro, he devises some gorgeous imagery (the man is a master of moody rain and diaphanous snowfall). And for the movie's most outré scene, he brings in Uma Thurman as a spurned and raging wife who has tailed her unfaithful husband to Joe's apartment—and brought along the couple's children to gaze upon "the whoring bed." Thurman's unhinged fury is startling and hilarious, and it gives the movie more of a jolt than all the epic bonking elsewhere on view. Well, some of it.

(Nymphomania: Volume I is actually the first half of a 160-minute movie. Volume II opens theatrically on April 4, but it's already available, along with Volume I, on VOD.)