Brickbat: Is That a Gun on Your Shirt? 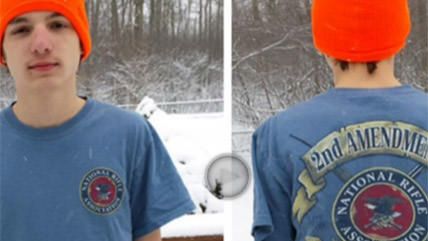 Officials at New York's Grand Island High School ordered sophomore Shane Kinney to turn his NRA T-shirt inside out or change shirts. When he refused, they gave him one day in in-school suspension. School officials refused to speak to a local TV station about the matter, but in a statement they denied any student had been suspended for wearing a T-shirt "expressing an opinion of the NRA or gun control."