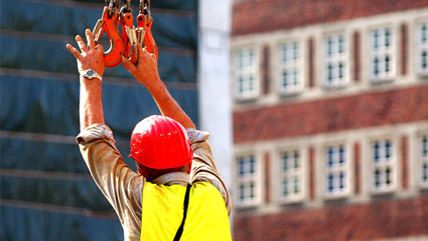 â€œI hear therefore with joy whatever is beginning to be said of the dignity and necessity of labor to every citizen. There is virtue yet in the hoe and the spade, for learned as well as for unlearned hands. And labor is everywhere welcome; always we are invited to work.â€ â€" Ralph Waldo Emerson, â€œThe American Scholar,â€ 1837.

From the start, Americans have had a love-hate relationship with work. We tend to rhapsodize about labor, but, at least in our personal lives, we praise labor-saving devices and condemn â€œmake-workâ€ schemes. (Unfortunately, public policy is another matter.) Emerson and other pillars of American culture â€" whom for these purposes I will call the moralists â€" associated work with dignity and purpose. Historian Thaddeus Russell teaches us that when the slaves were freed from the Southern plantations, they were pounded with the gospel of work. â€œSlaves generally considered work to be only a means to wealth, but after emancipation, Americans told them that work â€" even thankless, nonremunerative work â€" was a virtue in itself,â€ Russell writes in A Renegade History of the United States. He reports that the Freedmanâ€™s Bureau admonished the former slaves, â€œYou must be industrious and frugal. It is feared that some will act from the mistaken notion that Freedom means liberty to be idle. This class of persons, known to the law as vagrants, must at once correct this mistake.â€ Russell notes that â€œthousands of black men were rounded up for refusing to work.â€

The message was that work is not just an honest and proper way to obtain the necessities of life without mooching off others. The activity in itself is a source of goodness, even saintliness, and should be engaged in unceasingly, taking time out only for eating sleeping, other bodily functions, and tending to oneâ€™s family duties. One didnâ€™t work to live; one lived to work.

Whites had been subjected to the same harangue for ages: work was a reward in itself, apart from remuneration, because â€œidle hands are the devilâ€™s playground.â€

We must be clear that the message was not merely that work could be a source of satisfaction apart from the money. The message amounted to a vilification of leisure, indeed, of consumption. (Some conservatives seem to hold this view.)

In a good illustration of the â€œBootleggers and Baptistsâ€ phenomenon, the moralists were joined in their labor evangelism by employers, who needed uncomplaining workers willing to spend long hours in unpleasant factories. People preferred leisure and looked for every opportunity to indulge in it. Hence, â€œSaint Monday,â€ which, as Russell notes, Benjamin Franklin sneered at because it â€œis as duly kept by our working people as Sunday; the only difference is that instead of employing their time cheaply in church, they are wasting it expensively in the alehouse.â€

We get a different picture of labor from the economists. The classical economists and the Austrians (at least from Ludwig von Mises onward) stressed the unpleasantness â€" the â€œdisutilityâ€ and even sad necessity â€" of labor. Adam Smith and other early economists equated work with â€œtoil,â€ which is not a word with positive connotations. In The Wealth of Nations, Smith writes,

The real price of every thing, what every thing really costs to the man who wants to acquire it, is the toil and trouble of acquiring it. What every thing is really worth to the man who has acquired it and who wants to dispose of it, or exchange it for something else, is the toil and trouble which it can save to himself, and which it can impose upon other people. What is bought with money or with goods is purchased by labour, as much as what we acquire by the toil of our own body. That money, or those goods, indeed, save us this toil.

FrÃ©dÃ©ric Bastiat carried on this tradition by emphasizing that exchange arises out of a wish to bespared labor. One accepts the terms of an exchange only if obtaining the desired good in other ways would be more arduous.

For Bastiat and other early economists, exchange was the foundation of society. â€œSociety is purely and solely a continual series of exchanges,â€ Destutt de Tracy wrote. It follows that the penchant for economizing effort  â€" the preference for leisure â€" is a beneficent feature of human nature. (Somewhere, the science-fiction writer Robert Heinlein has a character say that the wheelbarrow must have been invented by a lazy person.)

Further, Bastiat explained, technological advancement is valued precisely because it substitutes the free services of nature for human toil. In his uncompleted magnum opus, Economic Harmonies, he wrote,

It is characteristic of progress (and, indeed, this is what we mean by progress) to transform onerous utility into gratuitous utility; to decrease [exchange-]value without decreasing utility; and to enable all men, for fewer pains or at smaller cost, to obtain the same satisfactions.

By onerous utility, he meant utility bought with sweat and strain; by gratuitous utility, he meant utility provided by nature free of charge. When ingenuity is applied to the making of a good, â€œits production has in large measure been turned over to Nature. It is obtained for less expenditure of human effort; less service is performed as it passes from hand to hand.â€ Needless to say, this is a good thing. Of course, some of the freed-up time will be devoted to producing other goods that were unaffordable yesterday, but some will be devoted to consumption, or leisure. The proportion set aside for leisure will likely increase as living standards rise (assuming government interference doesnâ€™t deny workers their rewards for higher productivity).

The goal of all men, in all their activities, is to reduce the amount of effort in relation to the end desired and, in order to accomplish this end, to incorporate in their labor a constantly increasing proportion of the forces of Nature.â€¦ [T]hey invent tools or machines, they enlist the chemical and mechanical forces of the elements, they divide their labors, and they unite their efforts. How to do more with less, is the eternal question asked in all times, in all places, in all situations, in all things.

(Bastiat elaborates on this in his remarkable chapter 8, â€œPrivate Property and Common Wealth,â€ which was the subject of my article â€œBastiat on the Socialization of Wealth.â€)

Bastiat agreed with Adam Smith, who wrote, â€œConsumption is the sole end and purpose of all production.â€ Hence the economists rejected the moralistsâ€™ view that production is an end in itself.

We see this same lack of enthusiasm for work in John Stuart Mill, an influential classical economist as well as philosopher. In 1849 Thomas Carlyle published an article lamenting that the end of slavery in Great Britain meant that white people couldnâ€™t make sure that blacks worked enough (for whites). (â€œOccasional Discourse on the Negro Question,â€ Fraserâ€™s Magazine for Town and Country, December 1849.) Indeed, this is why Carlyle dubbed economics, which was premised on free labor, â€œthe dismal science.â€

Mill wrote an anonymous response (â€œThe Negro Questionâ€) in the following issue. He protested Carlyleâ€™s suggestion that blacks were meant to serve white people. Then, as I wrote previously:

Mill â€¦ turned to â€œthe gospel of work,â€ praised by Carlyle, â€œwhich, to my mind, justly deserves the name of a cant.â€ He attacked the idea that work is an end in itself, rather than merely a means. â€œWhile we talk only of work, and not of its object, we are far from the root of the matter; or, if it may be called the root, it is a root without flower or fruit.â€¦ In opposition to the â€˜gospel of work,â€™ I would assert the gospel of leisure, and maintain that human beings cannot rise to the finer attributes of their nature compatibly with a life filled with labor â€¦ the exhausting, stiffening, stupefying toil of many kinds of agricultural and manufacturing laborers. To reduce very greatly the quantity of work required to carry on existence is as needful as to distribute it more equally; and the progress of science, and the increasing ascendency of justice and good sense, tend to this result.

In Mises and Murray Rothbard we find similar views: work is to be economized. Mises devoted an entire chapter in Socialism to refuting the state socialistsâ€™ claim that work is unpleasant only because of the market economy, and that it would be blissful if private property were abolished and the market were replaced with state central planning. Under any system, Mises wrote, labor may afford a small (and insignificant, he thought) measure of direct satisfaction, but that soon passes. Yet people must keep working to obtain its indirect satisfactions, the goods it enables them to buy.

Mises may overstate his case here, as did his mentor Carl Menger in the other direction (in 1871, mind you): â€œThe occupations of by far the great majority of men afford enjoyment, are thus themselves true satisfactions of needs, and would be practiced, although perhaps in smaller measure or in a modified manner, even if men were not forced by lack of means to exert their powers.â€

Mises mocked the state socialists by putting scare quotes around the words joy of labor, asking, â€œIf work gives satisfaction per se why is the worker paid? Why does he not reward the employer for the pleasure which the employer gives him by allowing him to work?â€

What people often take for the â€œjoy of labor,â€ he said, was actually the satisfaction of finishing a task, the â€œpleasure in being free of work rather than pleasure in the work itself.â€ Mises quoted the medieval monks who appended to the manuscript copies they had just painstakingly produced, â€œLaus tibi sit Christe, quoniam liber explicit isteâ€ (which he translated inexactly as â€œPraise the Lord because the work is completedâ€).

For Rothbard, leisure is a â€œdesirable good,â€ a consumer good, which people will forgo only if at the margin the fruits of a unit of labor undertaken are preferred to the satisfaction that a unit of leisure would afford. Rothbard acknowledged that labor can be satisfying and wrote,

In cases where the labor itself provides positive satisfactions, however, these are intertwined with and cannot be separated from the prospect of obtaining the final product. Deprived of the final product, man will consider his labor senseless and useless, and the labor itself will no longer bring positive satisfactions. Those activities which are engaged in purely for their own sake are not labor but are pure play, consumersâ€™ goods in themselves. Play, as a consumersâ€™ good, is subject to the law of marginal utility as are all goods, and the time spent in play will be balanced against the utility to be derived from other obtainable goods. In the expenditure of any hour of labor, therefore, man weighs the disutility of the labor involved (including the leisure forgone plus any dissatisfaction stemming from the work itself) against the utility of the contribution he will make in that hour to the production of desired goods (including future goods and any pleasure in the work itself), i.e., with the value of his marginal product. [Emphasis added.]

Rothbardâ€™s mentor, Mises, made a fundamental point about human action when he wrote, â€œEven if labor were a pure pleasure it would have to be used economically, since human life is limited in time, and human energy is not inexhaustible.â€

That being the case, I will reserve further thoughts on work for another time. Meanwhile, Laus tibi sit Christe, quoniam liber explicit iste!