Up in the air with Liam Neeson and a planeload of improbabilities. 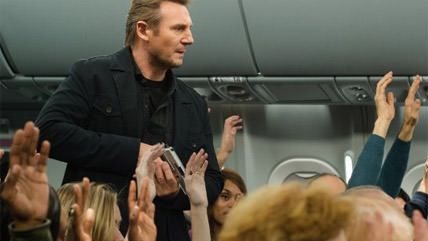 Frequent fliers who already resent—okay, loathe—the Transportation Security Administration probably wouldn't be surprised to learn that the TSA was employing armed alcoholics as air marshals on international flights. At this point what would we not believe? Although the possibility of the boozy sky cop looking like Liam Neeson, the go-to middle-aged action man for taut thrillers these days, might seem remote.

But it's a serviceable premise for Non-Stop, a movie in which Neeson plays federal air marshal Bill Marks, whose sad backstory is quickly sketched in at the beginning. We see him slumped in his car outside JFK airport fueling up on bourbon and gazing ruefully at a worn snapshot of a little girl—enough said. After a quick blast of breath freshener, he heads inside to his latest assignment, shepherding a fully-booked flight from New York to London. You know there are going to be problems, and will be happy to know in addition that they start erupting right away.

As Spanish director Jaume Collet-Serra demonstrated with the 2011 Unknown—a slick identity-games tale in which Neeson also featured—he has an affinity for tricky genre material. Here, though, he's working from a script whose writers have apparently never encountered a plot hole they couldn't saunter right past.

No sooner is the plane aloft than Marks begins receiving text messages from an unknown passenger. (Possibly due to native dimness, I was baffled by the phone-tech shenanigans in this movie.) The texter knows an awful lot about Marks—the name of his daughter, the fact that he's been ducking into the First Class lavatory for smoke breaks (although why Marks thought that might have gone unnoticed is a mystery). More annoyingly, the smartphone tormentor has an evil plan. He (she?) wants $150 million deposited immediately in an offshore bank account—number supplied—or else people will start dying, one every 20 minutes. Marks squints around in search of the malefactor. Could it be that Arab-looking gentleman with the kufi skullcap (Omar Metwally)? The burly guy with the bad attitude (Corey Stoll)? The mousy schoolteacher (Scoot McNairy)? Maybe one of the two flight attendants (Downton Abbey's Michelle Dockery, and Lupita Nyong'o of 12 Years a Slave)? Or even the woman sitting right next to Marks (Julianne Moore), a relentlessly chatty seatmate of the sort you want to smother with a small pillow?

It's hard to tell, because…everybody looks suspicious! When bodies do in fact begin dropping, and Marks learns that the offshore bank account is set up in his name (really?), he flips out. Soon he's charging up and down the aisles waving his gun around and manhandling passengers in pursuit of the bad guy. Somebody uploads phone video of this rampage, and before long TV news reports from down below are framing Marks as a terrorist hijacker. Worse yet, according to a new text, there's also a bomb hidden on the plane (we naturally see its glowing red digits ticking down suspensefully). The tension builds effectively, but we're continually distracted by the story's gaping implausibilities—some dubious business with a briefcase, a red-herring phone that turns up in a very unlikely place. And when the texting loon is revealed, the motive for this bizarre caper turns out to be both laughable and distastefully rooted in a real-world event.

Neeson almost manages to carry the film. At age 61, he's still believably badass, especially in a furious fight scene in a cramped lavatory (although the reason for the fight makes no sense). He's good with this late-career tough-guy stuff, and Collet-Serra has previously shown himself capable of putting the actor through his paces with a certain amount of style. They've already shot a third film together; one hopes the director brought a better script onboard for that one.