Mike Huckabee "Leading" in Early 2014 Early 2016 GOP Polling, Ought to Be Familiar: Everything Old is New Again 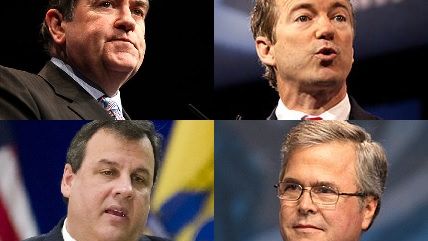 The eruption of Chris Christie's very Jersey scandal (traffic, bullying, cronyism) earlier this year as a national news story may have had more to do with his perceived 2016 aspirations than its wider newsworthiness. New early 2016 polling from CNN suggests the scandal's taken away the very early "lead" in the Republican presidential nominating contest even earlier CNN polling found, to the benefit of Hillary Clinton, the very early Democrat frontrunner, who's hoping to leave her national scandals in the past, and who earlier polling found polling within the margin of error in a hypothetical matchup with Christie.

The CNN poll found Mike Huckabee (a "new name" it called him) rising a point above the rest of the GOP field, at 14 percent. (Rand Paul had 13, followed by Christie and Jeb Bush at 10) The murmurs about the former Arkansas governor mulling a 2016 run may be new, but Huckabee, who ran for president in 2008, was considered by some Republican operatives as a presumptive frontrunner in 2012, and has hosted an eponymous weekend show on Fox News for more than five years, is hardly a new name. Less than a year out from the first GOP primaries, Gallup started tracking candidates' name recognition and "positive intensity" to get a clearer sense of what it actually meant when more familiar names appeared at the top of "trial heat" results.

We're still twice as far from a 2016 election as Gallup was when it started doing that, but there is some limited polling from them on the name recognition of some of the names thrown around as the primordial 2016 GOP pool. In June of last year, a Gallup poll (pdf) found 20 percent of respondents had never heard of Chris Christie, and 26 percent had never heard of Rand Paul. Mike Huckbaee's Name ID, and Jeb Bush's for that matter, weren't measured. But consider that Paul Ryan, who got 9 percent in CNN's poll, was "never heard of" by only 19 percent of Gallup responded. Marco Rubio, tied at 9 with Ryan, had 29 percent never hear of him in the Gallup polling. Presumably, Huckabee, a cable news figure and former Republican contender, and Jeb Bush, the brother of a former president and the son of another one, would have far higher name recognition. Without that information, it's hard to tell what the number means, except that Republicans aren't sure who they want running for president yet. The more important decision might be in what ideological direction the party should go, something that's being litigated in Congress and on the state level, not just in the 2014 elections, but in the debates about the party's agenda that are already preceding them, as Peter Suderman noted when he declared Obama, not in this round of polling questions, was over.