OFA Knows What You Want to Hear About in the State of the Union: the Economy, Good-Paying Jobs, How Awesome Obamacare is, Immigration Reform, Climate Change 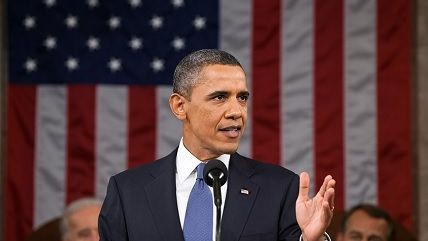 Last week, I brought you a "one question survey" from Organizing for Action (OFA, a 501(c)4 prohibited from supporting a specific candidate) that asked what you wanted to hear the president talk about in his state of the union address tonight. OFA e-mailed the "results" (vague, natch), which ought to dispel any reasonable doubt that OFA (formerly known as Obama for America) is little more than an Obama fan club:

Before you tune in for the State of the Union at 9:00 p.m. Eastern Time, I wanted to report back on what OFA supporters said they wanted to hear in the President's speech tonight.

The top responses from folks like you: the economy, good-paying jobs for the middle class, health care reform and the benefits millions of Americans are already seeing, immigration reform and where that fight goes from here, and what we're going to do about climate change.

As President Obama lays out his national agenda tonight, OFA supporters across the country will be watching and gearing up for the months ahead.

There's a lot left to do, and a lot standing in our way—it's going to take all of us pitching in, but I believe we can make serious progress this year.

Say you're ready for the fight:

Hopefully in all the bloviating going down tonight, President Obama doesn't forget to pat himself, and his supporters, on the back. He'll certainly explain how there's still "so much" work to do and how those who disagree with him are "standing in the way," even though he's been president for five years now and dissent is part of the fabric of American politics, something he understood before it was his chance to be an imperial president. The rest of America, wisely, seems to be tuning out on what's turning out to be a failed presidency.