What the Pope Gets Wrong About Capitalism 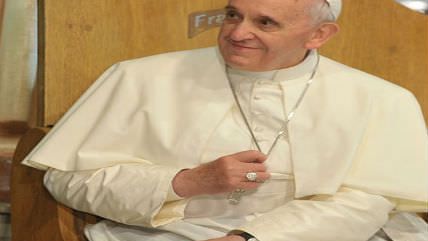 Pope Francis' first apostolic exhortation, "Evangelii Gaudium" ("The Joy of the Gospel"), is a beautiful document and a joy to read. I'll leave its theological implications to those who live in the Roman Catholic Church. What's got many people praising the pope today, though, is not his plea for good works but rather his critique of capitalism.

You could always detect a pinch of socialistic seasoning in the church's theological stew. But in this case, the pope doesn't simply point out that the wealthy aren't doing enough to help alleviate poverty. He uses the recognizable rhetoric of the political left to accuse free market systems of generating and nurturing that poverty.

The pope condemns the "new tyranny" of "idolatry of money," reasonably arguing that economic systems should not be accepted with blind faith but also saying that "as long as the problems of the poor are not radically resolved by rejecting the absolute autonomy of markets and financial speculation and by attacking the structural causes of inequality, no solution will be found for the world's problems or, for that matter, to any problems."

For starters, it's troubling that the pope fails to make any genuine distinction between Western poverty (terrible) and the poverty of the Third World (unimaginably terrible). But is it really true that "absolute autonomy of markets and financial speculation" are the driving reasons for poverty and inequality? People in places such as Congo, Burundi and Mozambique live under corrupt authoritarian regimes where crippling poverty has a thousand fathers — none of them named capitalism. The people of Togo do not suffer in destitution because of some derivative scheme on Wall Street or the fallout from a tech IPO.

"While the earnings of a minority are growing exponentially," the pope goes on to say, "so too is the gap separating the majority from the prosperity enjoyed by those happy few."

In truth, global inequality has been dropping for years. The World Bank estimates that global poverty was halved from 1990 to 2010. In fact, according to the World Bank, the United Nations' "millennium development goal" of cutting world poverty in half by 2015 came in five years ahead of schedule, despite a major global recession. The decline in poverty coincides, not coincidentally, with developing nations embracing more market-based systems.

Moreover, the pope falls into the trap of conflating inequality and poverty. Some countries enjoy income parity because most citizens are rich, and others do so because most citizens are poor. Put it this way: Egypt, Pakistan and Mongolia all enjoy more economic equality than the United States. The gross domestic product per capita here is $49,800. In Argentina, the pope's homeland, a place where wealth is more fairly distributed, it's $18,200.

Now, no reasonable person believes that any economic system is a cure-all. But how many reasonable people argue that market-based economies — and the underlying morality that drives them — haven't done more to alleviate poverty worldwide than any other system? For the most part, in fact, the more unfettered a nation's economic system is the more prosperous the population becomes and, consequently, the more it spends on charity and safety net programs. When we match up The Heritage Foundation's Index of Economic Freedom with the World Bank's measure of per capita income, we find that the countries with the most unencumbered systems and the most financial "speculation" usually have the least amount of poverty.

Rather than credit those who do their best to balance this imperfect system that lifts millions out of impoverishment, the pope attacks them for the prevalence of imaginary economic Darwinists who callously keep equality from blooming. "Consequently," these people "reject the right of states, charged with vigilance for the common good, to exercise any form of control," Pope Francis contends.

Any form of control? Really? The Federal Register in this country regularly comes in at more than 60,000 pages. Or, to put it another way, it's longer than all 46 books of the Old Testament, the 27 books of the New Testament and every gospel the Council of Nicaea decided to toss, combined. And the United States, a place teeming with these economic Darwinists, also happens to be one of the most charitable places on the planet — even before we begin counting per capita spending on safety nets.