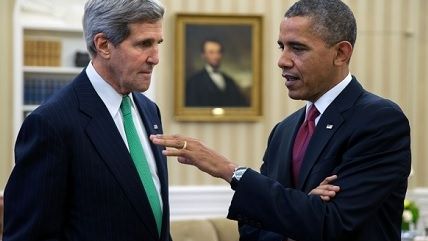 It's hard not to wonder whether the interest by some senators to bring fear mongering on Iran back to the forefront of Washington's agenda is related to what a shit job that body's done on everything from developing a federal budget to passing the mess that Obamacare has revealed itself to be as is in the first place. It's certainly also possible that Secretary of State John Kerry is so far down the rabbit hole of "the White House is never wrong" that he can't make a credible argument in favor of an Administration policy even when that policy is sound.

Whatever the case, John Kerry was apparently not successful in convincing Senate hawks that renewing sanctions while negotiations with Iran have not yet collapsed is a bad idea. In fact, Republicans reportedly stormed out of yesterday's briefing while Democrats didn't want to comment. Via Foreign Policy:

"It was solely an emotional appeal," Sen. Bob Corker (R-TN) told reporters after the briefing. "I am stunned that in a classified setting, when you're trying to talk with the very folks that would be originating legislation relative to sanctions, there would be such a lack of specificity."

"Today is the day in which I witnessed the future of nuclear war in the Middle East," said Sen. Mark Kirk (R-IL), a staunch Iran hawk. "This administration, like Neville Chamberlain, is yielding large and bloody conflict in the Middle East involving Iranian nuclear weapons." Kirk added that he felt the briefing was "anti-Israeli."

The vituperative GOP response was matched by relative silence by exiting Democrats.

"No comment," said Tim Johnson (D-SD), the chairman of the Senate Banking Committee.

Sen. Harry Reid (D-NV) declined to answer questions about sanctions as he ascended a congressional escalator.

"Was this a helpful briefing?" asked The Cable.

When asked how so, Reid did not elaborate.

Corker, Kirk and the rest can read a case against new Iran sanctions not rooted on emotional appeal here. John Kerry's welcome to lift from it, no footnotes necessary.

They can all also read more Reason commentary on Iran here.