She was also married to a cop now under investigation 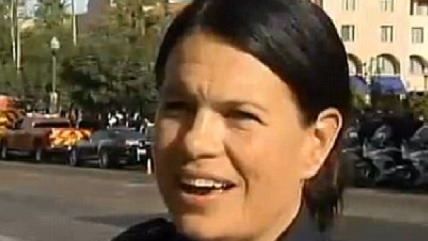 Several week ago, Jessica Dever-Jakusz resigned her position as a police officer in Tempe, Arizona. A memo from the police chief confirming her resignation led to a public records request, which revealed that Dever-Jakusz had told an alleged drug dealer she was having sex with that she and two other females buying "Molly" (MDMA, mostly, kinda) from him were undercover cops investigating him. Cops found out what happened when the target of the investigation showed up at a police station to tell them. The Arizona Republic explains:

While revealing her identity to the suspect, Dever-Jakusz said her "ex," a Chandler police officer, was "looking up a bunch of stuff" on him, the report said. She suspected his motivation was "for other than a legitimate purpose as a law-enforcement officer," the report said.

Chandler police confirmed last week that Officer Garrett Dever is the subject of an internal-affairs investigation and is married to Jessica Dever-Jakusz, but refused to release other details until the investigation is complete.

The report did not say why the suspect came forward, but it said his decision to divulge Dever-Jakusz's statements to police made it impossible for them to file charges against him for drug sales to Dever-Jakusz.

The department apparently considered Dever-Jakusz, a 14-year veteran, a "shining star." She was "hand-picked" by supervisors for an unnamed reality show where she was sent to Switzerland, along with another officer, earlier this year.The police report said Dever-Jakusz believed investigators were joking when they first asked her about the affair with the alleged drug dealer, according to the local CBS affiliate.

In their report, the Tempe Police Department recommended to county prosecutors that Dever-Jakusz be charged on two counts of "hindering prosecution". The alleged drug dealer had been targeted for four months before his visit to the police station appears to have ended it, for now.

More Reason on the "Molly" panic here and how drug criminalization lowers the quality of MDMA available on the market and hurts consumers here, and you can add scorned lovers who carry badges as another reason you should worry about government surveillance even if you have "nothing to hide."