Cop Shoots Puppy in the Head Despite Owner's Pleas With Police 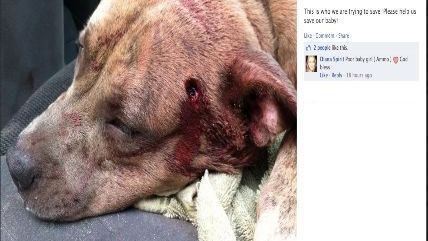 On Sunday, Anna "Chrissy" Music-Peed, of Macon, Georgia drove to the Jones County Sheriff's Department to ask if an officer would come to her property to investigate a vehicle that had been brought there by someone she knew which she and her roommate suspected was stolen.

While at the Sheriff's Department Music-Peed asked that the cops sent to investigate the vehicle not shoot her dogs when they arrived at her property. The 10-month-old puppy Ammo was described by Music-Peed as being jumpy but friendly.

However, according to Music-Peed's roommate Kyle Sewall, when Sergeant D. Little (who shot another dog last year) arrived at the property he shot Ammo point blank in the head.

JONES COUNTY, GA — A woman says that her ten-month old puppy was shot in the head after asking officers not to shoot it — twice.

On September 22, Anna "Chrissy" Music-Peed, of Macon, GA, drove to the Jones County Sheriff's Department to request an officer come to and investigate a vehicle that had been brought to her property by an acquaintance, that both she and her roommate strongly suspected to have been stolen.  Music told policestateusa.com that it was a Nissan Xterra from Virginia Beach, VA.  As Music wrote in a blog post, "I will not have that influence around my family," saying she was trying to do the right thing by making a report.  The acquaintance was still on the property and Music had not let on that she had gone to talk to the police.

Here is the link to a Facebook page dedicated to raising money for a now-completed surgery for Ammo. Click "MORE" below to see a graphic photo of Ammo after she was shot.