Obama to Seek Congressional Authorization for Intervention in Syria, Says He Doesn't Need It, Or Any Other Kind

Has decided to take military action in Syria 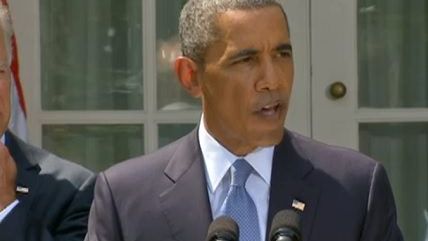 President Obama spoke at the Rose Garden today, announcing he had made the decision to take military action in Syria based on the use of chemical weapons, a violation, he said, of an international standard. He said he believed he had the authority to act, but preferred a vote in Congress first, something polling indicates an overwhelming majority of Americans want.

President Barack Obama has decided to use force against Syria, but he will first seek congressional approval, he said in a Rose Garden speech Saturday afternoon.

"I will seek authorization for the use of force from the American people's representatives in Congress," Obama said.

Obama said he has decided using force against Syria is necessary and does not require cooperation from other nations.

UN inspectors left Syria today, and will be testing samples they collected. Russia's Vladimir Putin, meanwhile, disputed the notion that Assad would provoke a Western intervention by using chemical weapons.