Support for Cutting Off US Military Aid to Egypt Growing in Washington; Saudi Arabia Ready to Step In 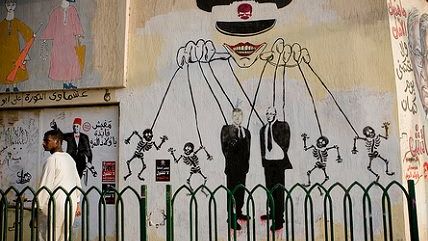 The death toll in Egypt has surpassed 800, by the government's own figures, as the post-coup violence in the country continues. Egypt's military government is mulling a ban on the Muslim Brotherhood, which it blames for unrest in the country, and has cracked down on the Islamist group that was banned in the country for much of the 20th century until coming to power in the country's first democratic elections last year. The military government also arrested the brother of Al Qaeda leader Ayman al-Zawahiri, a Morsi ally who is accused of trying to bring armed men into a mosque security forces were trying to raid. Mohammed al-Zawahiri claimed credit for the violent protests and assault on the US embassy in Cairo last September 11. The leader of the Muslim Brotherhood last month called for the US embassy to be stormed again. US Ambassador Anne Patterson was, before the coup, accused by some Egyptians of helping the US prop up the Muslim Brotherhood government in Egypt.

The continuing violence in the country is nudging politicians in Washington toward finally cutting off military aid to the country. Last month, the US announced it was suspending shipments of fighter jets to Egypt, although when Rand Paul's legislation to cut off aid to Egypt reached the Senate floor a week later, only 13 senators voted for it. Nevertheless, support is now growing for such a move (something reported by media outlets ranging from Voice of America to Iran's Press TV). John McCain this weekend accused John Kerry of making statements while in Egypt that suggested US legitimization of the Egyptian regime, though continued US aid to the country (which McCain now also opposes) probably does a lot more for legitimizing the regime than John Kerry's words.

Anticipating possible changes in the arrangement whereby the US sends billions of dollars to Egypt's military, Gulf monarchies, led by Saudi Arabia, pledged $12 billion in aid to Egypt last month. Today, Saudi Arabia's foreign minister said his country would replace any Western aid to Egypt that was cut off. Saudi Arabia's willingness to spend money where the United States may no longer wants to illustrates that America's status as an "indispensable power" is only as indispensable as American politicians want it to be.