You Too Can Make a Gun Law-Defying, Nail-Firing Space Gun 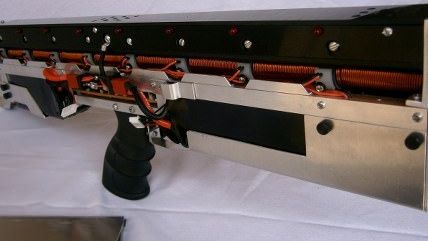 At Reason, we've devoted a lot of attention to firearms manufactured on 3D printers as part of a deliberate effort to derail government efforts to disarm their subjects. Perhaps we've been misguided in our attentions to this subversive technological movement. Perhaps, instead, we should have devoted more of our time to covering awesome homemade weapons that harness electromagnetic forces to fling easily sourced nails through the air with enough destructive power to make government officials wet their knickers.

3D-printed guns have been making the news a lot recently. That's not to say that they and their creators don't deserve the press — people arming themselves without so much as a permit is pretty terrifying. But whoever it was that said 3D printing was the only way for people to circumvent the law and arm themselves just might not have seen this bad boy.

This fully-automatic Gauss gun, dubbed the CG-42, has a 15-round capacity and can fire an entire clip of ammo in 1.5 seconds. What it fires is almost as frightening as the gun itself, because the CG-42 is armed with nails, side-stepping the need for even the slightest of paper trails.

Gauss guns, also known as coilguns, turn on electromagnetic coils in a series to pull a metal objects along a path. Do it fast enough and you have the sort of weapon that many science fiction writers have imagined, and that some real-world engineers have constructed. Delta-V Engineering is a project of Jason Murray for "making concepts from science fiction become reality." And he did just that with the CG-42, which is just the latest in a series of homemade coilguns. Yes, his designs and specifications are posted online.

The CG-42 won't be knocking enemy spaceships out of the sky any time soon — it generates just 10.78 joules of muzzle energy, which makes it less powerful than your average air gun. But, as the video below demonstrates, that's plenty enough wrecking power for demonstration purposes.

And it's certainly enough to get the likes of Senator Feinstein looking into tight legal restrictions on this whole electromagnetism thing.